Joe Biden arrived at the G20 summit on Tuesday morning on a mission to further isolate Russia over its war in Ukraine, as Ukrainian President Volodymyr Zelensky declared that “now is the time” to end the war. in his country.

“I am convinced that now is the time when the destructive Russian war must and can be stopped,” said Zelensky, appearing remotely at a conference skipped by Russian President Vladimir Putin.

It will save thousands of lives.

According to AFP, Russian Foreign Minister Sergey Lavrov stayed in his seat to listen to the speech, and European leaders stayed in theirs for comments, despite strikes before the summit began.

Zelensky delivered his speech after making a dramatic return to Kherson following a Russian military withdrawal from the regional capital it took after its February invasion.

Zelensky found good company among the leaders who met at the luxurious Kempinski Hotel, which boasts spectacular ocean views.

China’s Xi Jinping condemned the ‘weaponization’ of food and energy in what observers saw as a rare criticism of the way Vladimir Putin was waging the war in Ukraine.

“We must firmly oppose the politicization, instrumentalization and weaponization of food and energy issues,” he said. 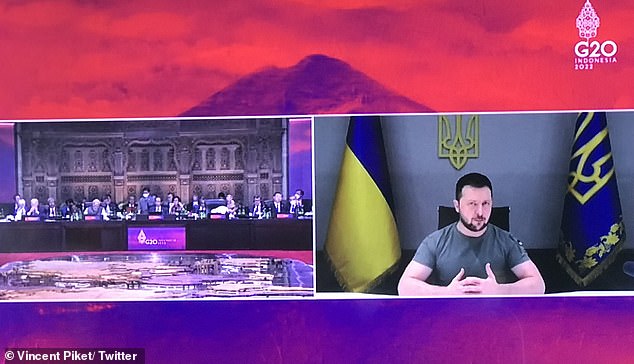 Ukraine’s President Volodomyr Zelensky addressed the G20 summit in Bali via video link on Tuesday, urging the leaders to drive Russia out of their country after months of war. 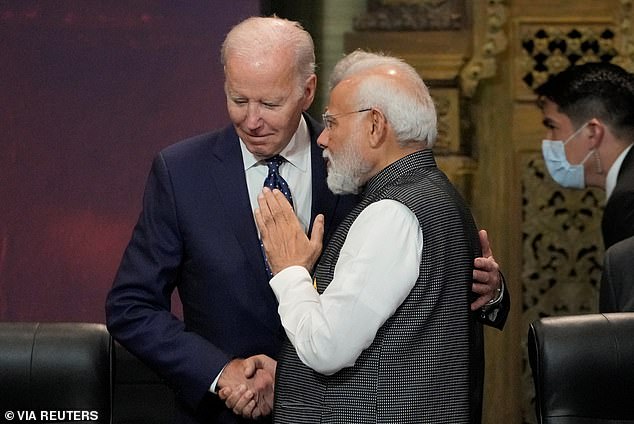 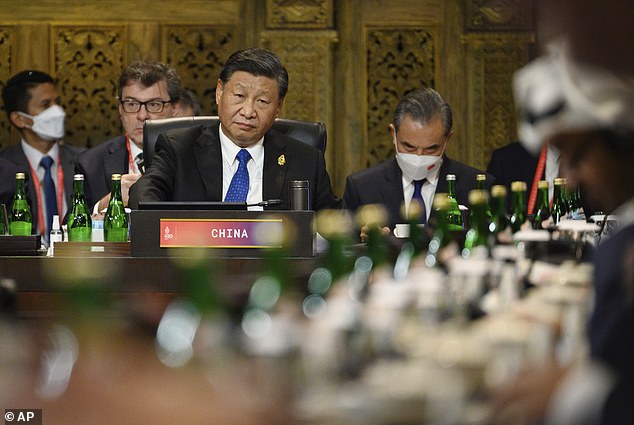 “If the war doesn’t end, it will be difficult for the world to move forward,” Widodo said. ‘We must not divide the world into parts.

‘We must not allow the world to fall into another cold war.’

Asked how he would handle Lavrov, Sunak told reporters: “I am going to take the opportunity to unequivocally condemn the Russian state and Putin for their abominable and illegal war.”

Biden and his allies are trying to pin painfully high food and fuel prices on Vladimir Putin in an effort to build consensus among countries like India and China that have been reluctant to speak out against China.

In the face of a joint G20 statement that would condemn the eight-month invasion and threats to use nuclear weapons, US and European officials have painted the summit as evidence of Russia’s deepening isolation.

But before the meetings could begin, the Cambodian prime minister, who hosted Joe Biden and other leaders over the weekend, announced that he had tested positive for COVID-19.

A statement posted on Hun Sen’s Facebook page said he would return home and cancel the meetings.

Biden left his hotel 30 minutes late for the summit, and the White House later said he had tested negative. 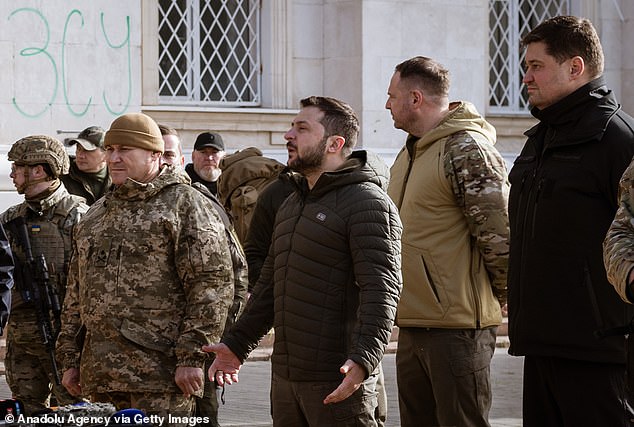 Ukraine’s President Volodymyr Zelenskyy spoke at the conference remotely after a dramatic return to recaptured Kherson. 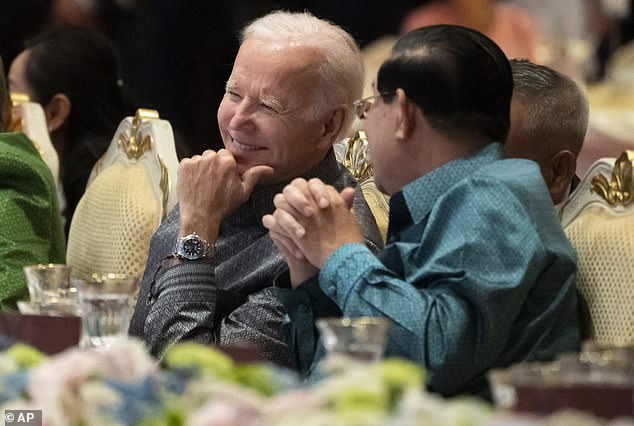 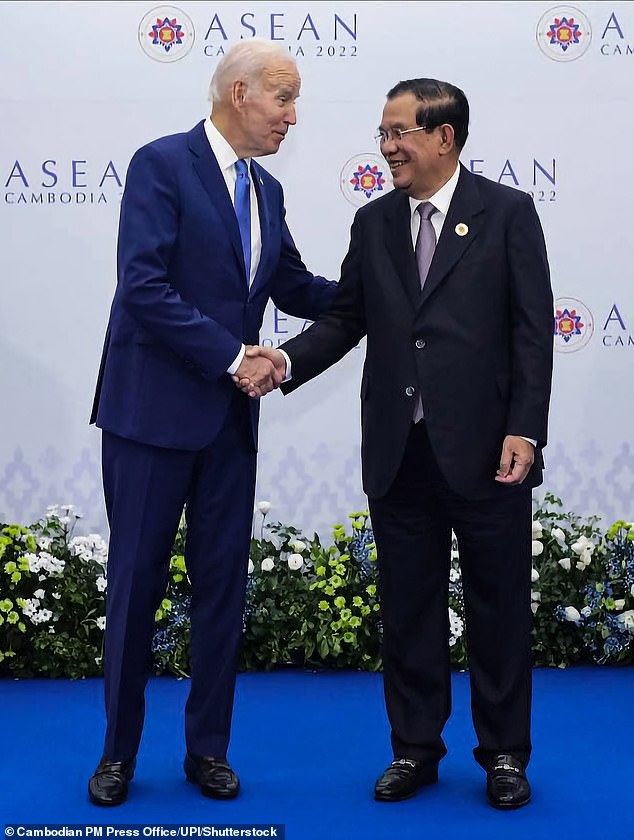 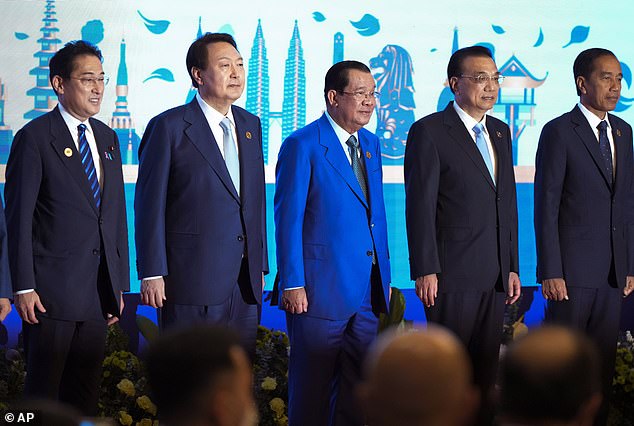 Earlier, a US official said the G20 would condemn Russia’s war.

“I won’t get ahead of the final negotiations, but the G20 will make it clear that Russia’s war is wreaking havoc on people everywhere and on the world economy as a whole,” said the official, speaking about the view of the United States. United on the summit on condition of anonymity.

“It will be clear that most members of the G-20 condemn Russia’s war and the immense suffering of this cause for both Ukrainians and families in the developing world who face fuel and food insecurity as a result. “.

The summit is already brief with the departure of the Cambodian Prime Minister, Hun Sen.

Officials hope none of their guests at the weekend’s summit of Southeast Asian leaders and others will be affected.

A day earlier, Biden cleared his throat and apologized to reporters at a news conference.

Everything marked an uncertain start to the summit, where the leaders had already decided Skip the traditional ‘family photo’ so people like Biden can avoid having to smile for the camera alongside Sergey Lavrov, Russia’s foreign minister.

But US officials say the summit will include condemnation of Russia. 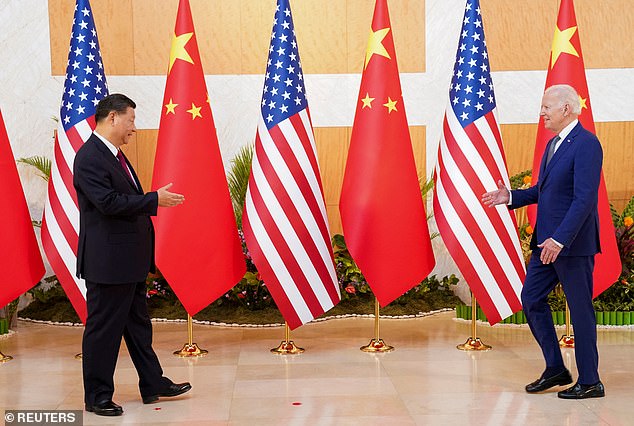 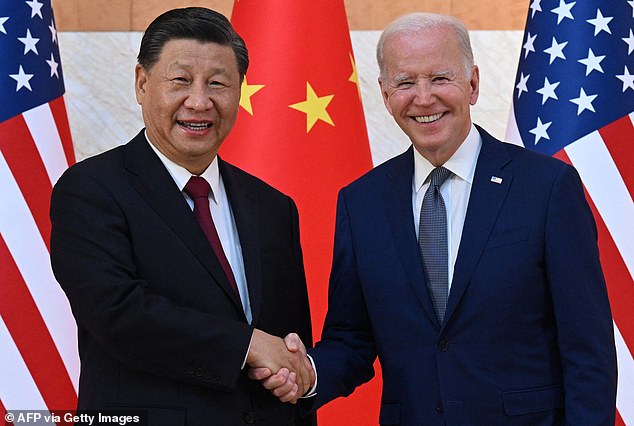 The two showed warm body language before their meeting, but they clashed over Taiwan.

The summit is the final leg of Biden’s foreign policy blast around the world.

He was in Egypt for three hours on Friday to attend the COP27 summit, before flying to Cambodia for less than 48 hours to attend the ASEAN summit.

On Monday he met Xi for the first time as president. Both leaders appeared maskless with entourages covering their faces.

They clashed over Taiwan and discussed North Korea’s threat to the region, among other issues. 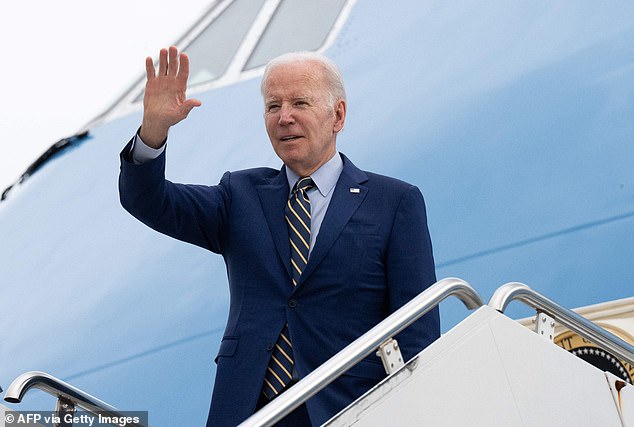 Biden is due back at the White House Thursday night before his daughter Naomi’s wedding on Saturday.

US officials have said that Biden’s trip has shown that countries large and small are willing to condemn Russian aggression.

It comes days after Ukraine’s foreign minister was invited to attend the Association of Southeast Asian Nations summit in Cambodia, where he became the latest signatory to the group’s friendship and cooperation treaty.