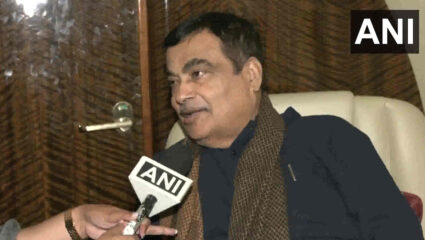 New Delhi. Amid the ongoing politics over Delhi’s ‘very poor’ air quality, Union Minister Nitin Gadkari on Tuesday said the solution to the problem of air pollution is a bit difficult but not impossible. He also said that there should be no politics on this issue and the Centre, state government, municipal corporations and farmers should work together.

It is noteworthy that the Air Quality Index (AQI) in Delhi was recorded in the ‘very poor’ category on Tuesday morning for the fourth consecutive day. According to the Central Pollution Control Board (CPCB) data, the 24-hour average AQI in the national capital stood at 348 at around 9:15 am on Tuesday. The AQI was 339 on Sunday which increased to 354 on Monday. On Saturday it was 381. AQI between 0 and 50 is ‘good’, 51 and 100 ‘satisfactory’, between 101 and 200 ‘moderate’, between 201 and 300 ‘poor’, between 301 and 400 ‘very poor’ and 401 and more Between 500 is considered in the ‘severe’ category. According to the Meteorological Department data, Delhi recorded a maximum temperature of 33 degrees Celsius on Monday, the highest since 2008 in the month of November.

Solving Delhi’s pollution problem is a little difficult but not impossible. If Central govt, state govt, municipal corporation & farmers make efforts together then we can solve the problem. We should forget politics and work together regarding it: Union minister Nitin Gadkari pic.twitter.com/X0SrcVLX6S

During an interaction with the media, Nitin Gadkari said, “It is our priority to address air, water and noise pollution. We are building roads worth Rs 60,000 crore around Delhi, which will make this area free from traffic jams. We have brought electric vehicles and green hydrogen.”

Gadkari said on Delhi’s pollution that, “Solution of Delhi’s pollution problem is a bit difficult but not impossible. If the central government, state government, municipal corporation and farmers make efforts together, then we can solve the problem. We should forget politics and work together on this.”

On reducing road accidents, Gadkari said, “We have 5 lakh road accidents, mostly people in the age group of 18-34 are victims. We are trying our best to reduce the accidents still I am not satisfied. People need to be educated and we are also focusing on road engineering and emergency services.” He said, “People should follow the rules, an important problem is that there is no fear of law among any kind of people. Our target is to reduce 50% of accidents.”