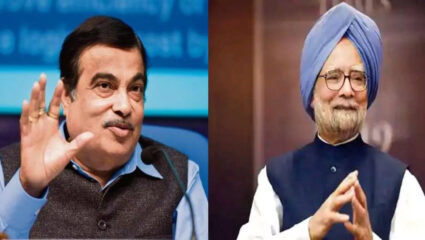 New Delhi. Road Transport and Highways Minister Nitin Gadkari on Tuesday praised former Prime Minister Manmohan Singh for giving a new direction to the country through economic reforms, saying the country is indebted to him. Addressing the ‘TIOL Awards 2022’ function held here, Gadkari said that the economic reforms initiated by the then Finance Minister Manmohan Singh in the year 1991 showed a new direction to India.

He said in a program organized by the portal ‘TaxIndiaOnline’, “The country got a new direction due to the liberal economy. The country is indebted to Manmohan Singh for that.”

Gadkari also mentioned the help that Manmohan’s policies helped in raising money for Maharashtra’s roads in the nineties. He said that due to the economic reforms initiated by Manmohan Singh, he was able to raise funds for these road projects when he was the Maharashtra minister.

In the context of India, Gadkari said that the country will need more capital investment to accelerate economic growth. Referring to the construction of 26 expressways being done by his ministry across the country, he said that he has not faced any shortage of money in this.

He said that the National Highways Authority of India (NHAI) is also raising money from the common man for the construction of highways. According to Gadkari, NHAI’s toll revenue will increase to Rs 1.40 lakh crore by the end of 2024 from Rs 40,000 crore currently. (agency)