A new podcast has shed light on the war of words which raged between Princess Diana and King Charles in the early 90s.

Patrick Jephson, who was the late royal’s press secretary from 1988 to 1996, claimed in the new podcast The Scandal Mongers, hosted by royal authors Phil Craig and Andrew Lownie, that sources close to the King orchestrated a ‘systematic’ smear campaign against his estranged wife, which made her life ‘hell.’

He added that he was frustrated by the fact it has now become ‘accepted’ that Diana struggled mentally, and said she in fact showcased ‘extraordinary strength’ under the pressure of royal life and media attention.

Meanwhile, Phil Craig, who wrote Diana: Story of a Princess, said that these briefings have had a lasting impact on the legacy of the King’s first wife, and added they were the ‘nastiest’ aspect of the War of the Wales. 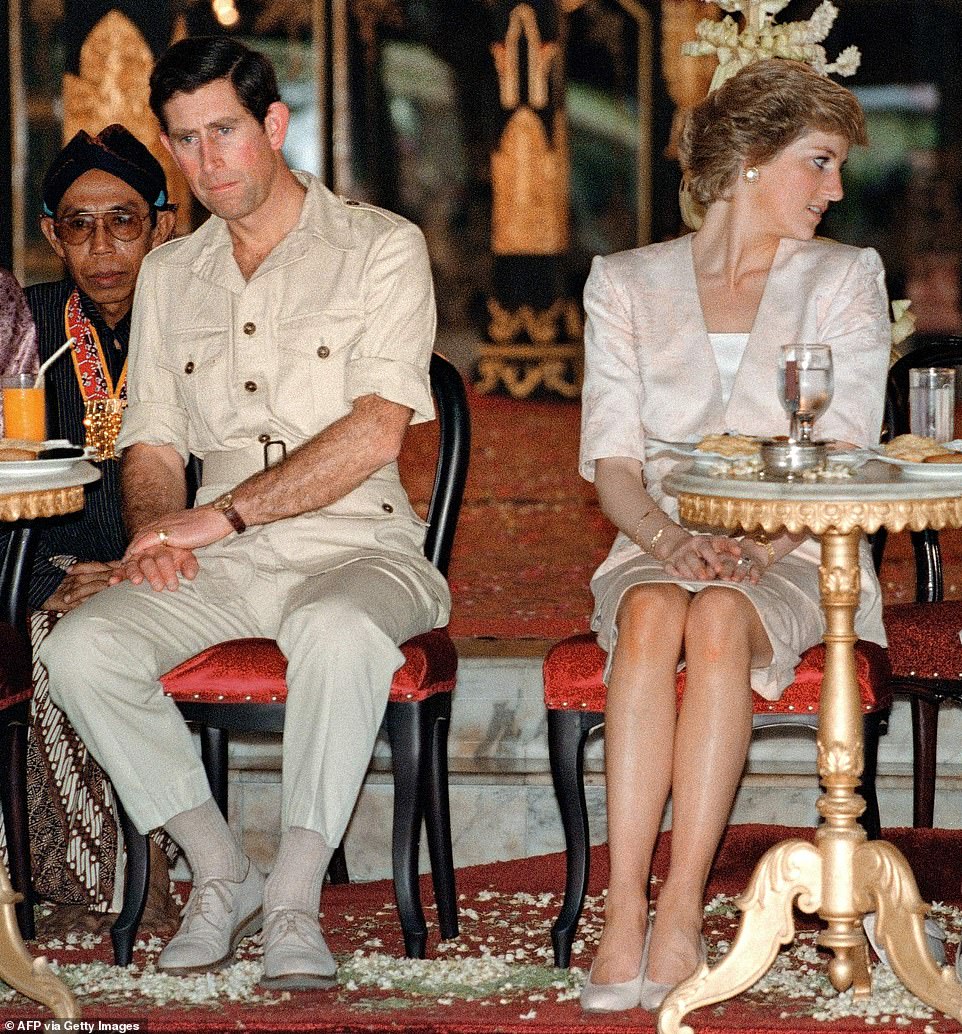 Patrick Jephson, who was the late royal’s press secretary from 1988 to 1996, claimed in the new podcast The Scandal Mongers , hosted by royal authors Phil Craig and Andrew Lownie, that sources close to the King orchestrated a ‘systematic’ smear campaign against his estranged wife, which made her life ‘hell.’ Pictured in 1989 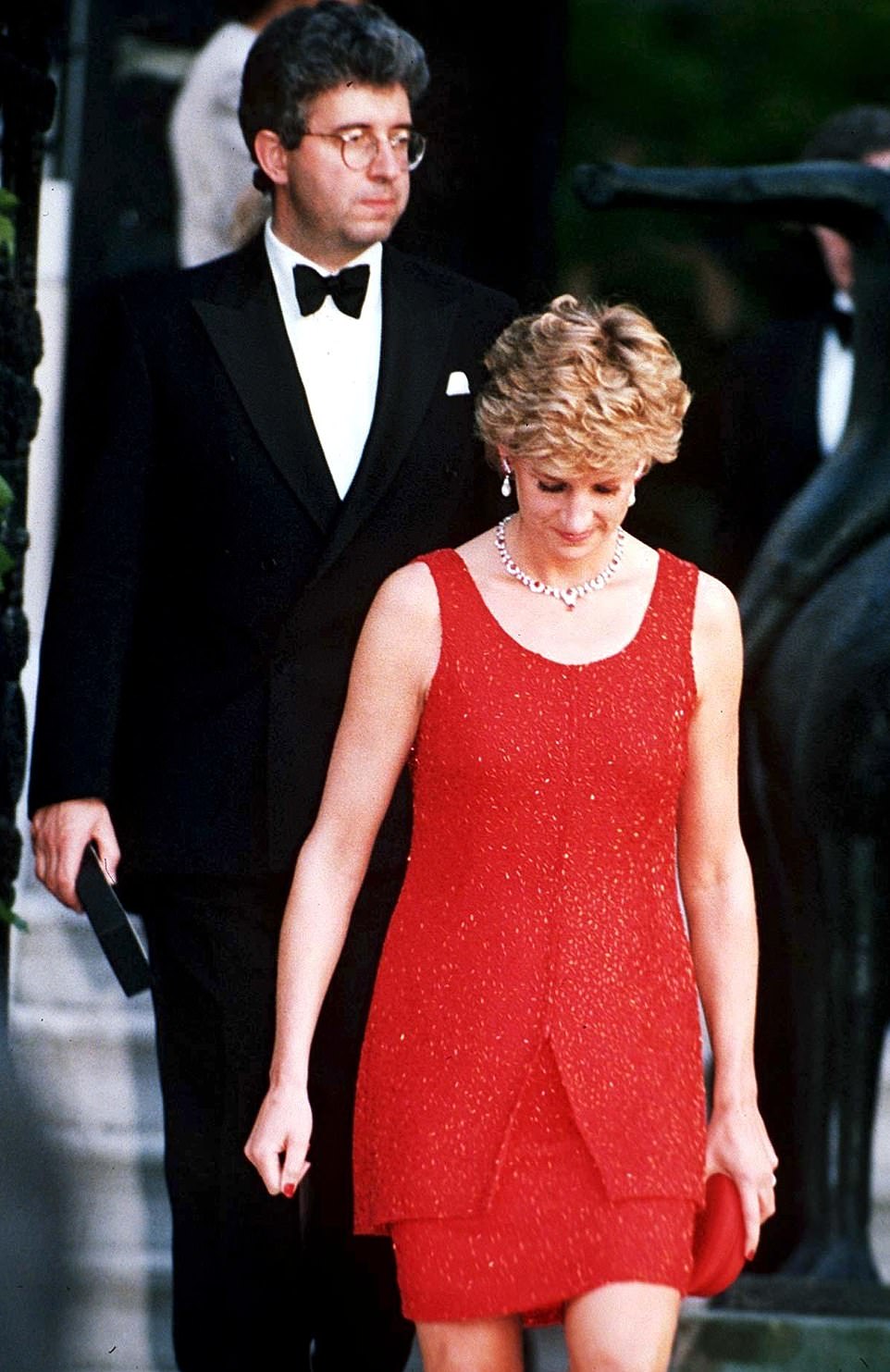 Jephson and Diana in 1996. The royal expert added that Diana knew that Charles’ friends were feeding negative stories about her to the press 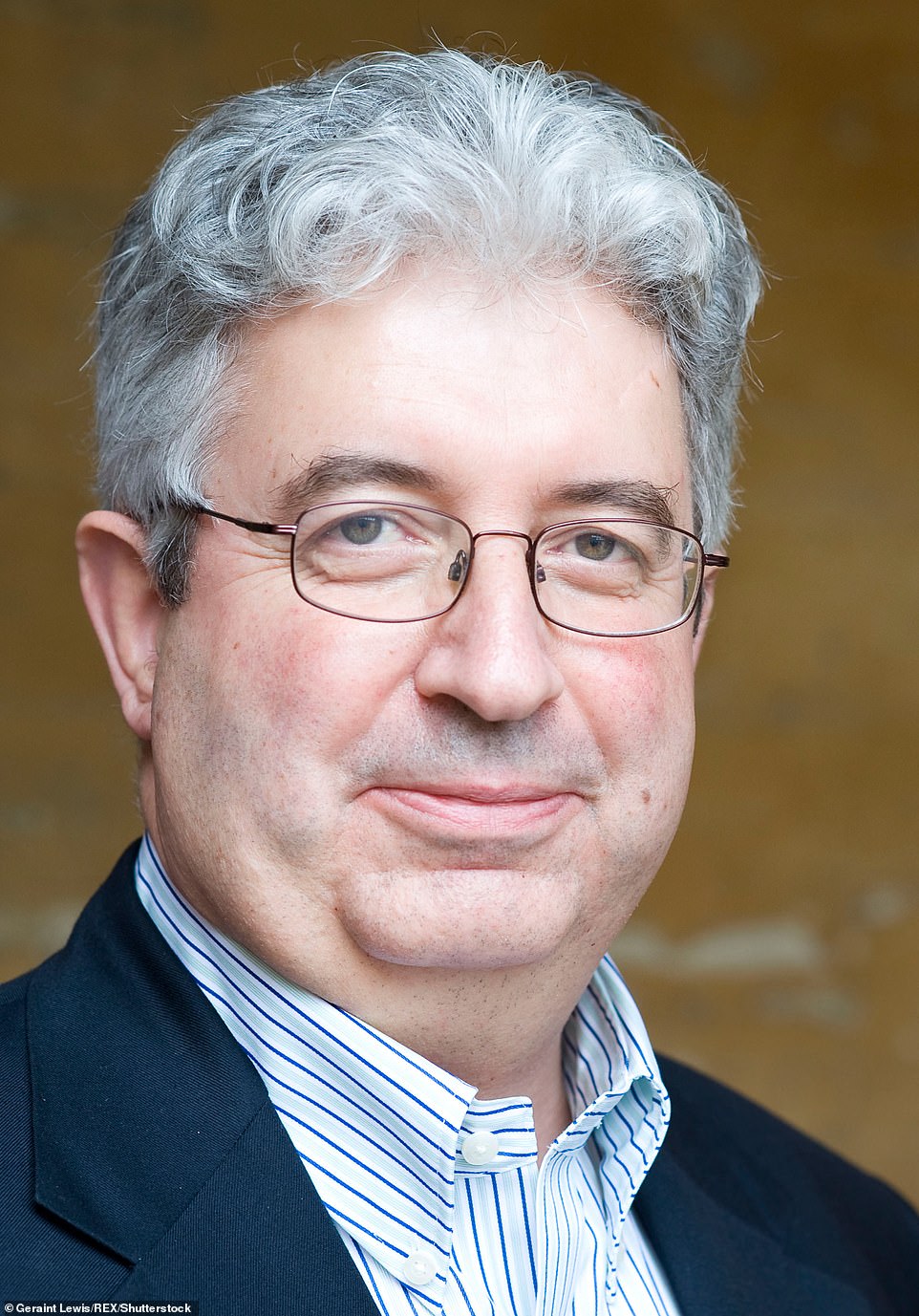 The former press secretary, picttured, added that he was frustrated by the fact it has now become ‘accepted’ that Diana struggled mentally, and said she in fact showcased ‘extraordinary strength’ under the pressure of royal life and media attention

Jephson claimed that this campaign of disinformation went beyond ‘casual gossip’ and was a ‘systemic campaign, Page Six reported.

He said he was ‘very frustrated,’ by the allegations that Diana was ‘a bit crazy’ had ‘become the official line.’

He added: ‘Considering the life she lived, considering the pressures she was under, she wasn’t just sane, she had a kind of ability to restore sanity to crazy situations.’

He added that Diana, who died aged 36 on August 31 1997, was aware that her ex-husband’s camp effort to discredit her in the press, and would use it to her advantage. 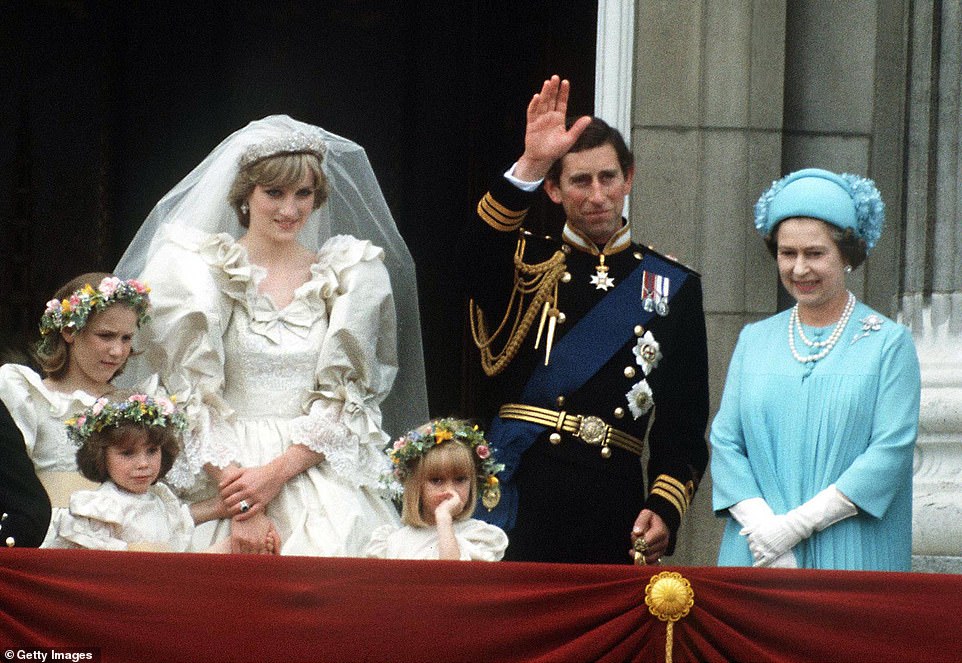 Princess Diana and Prince Charles pictured on the Buckingham Palace balcony on their wedding day on July 29, 1981. The royal couple’s divorce was finalised in August 1996 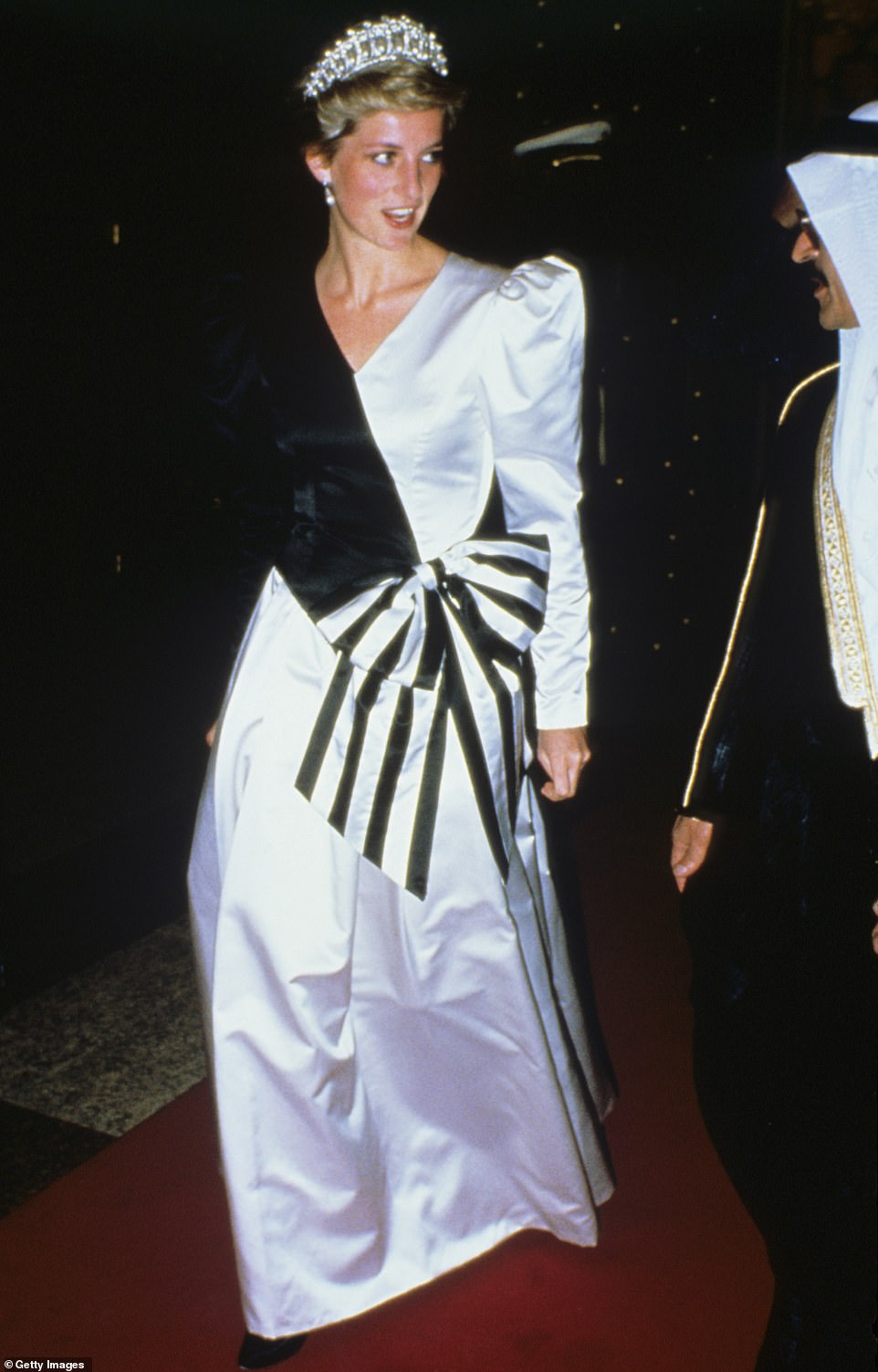 Diana, pictured in Saudi Arabia in 1996, used smear campaigns that were spread against her to her advantage, according to her former press secretary 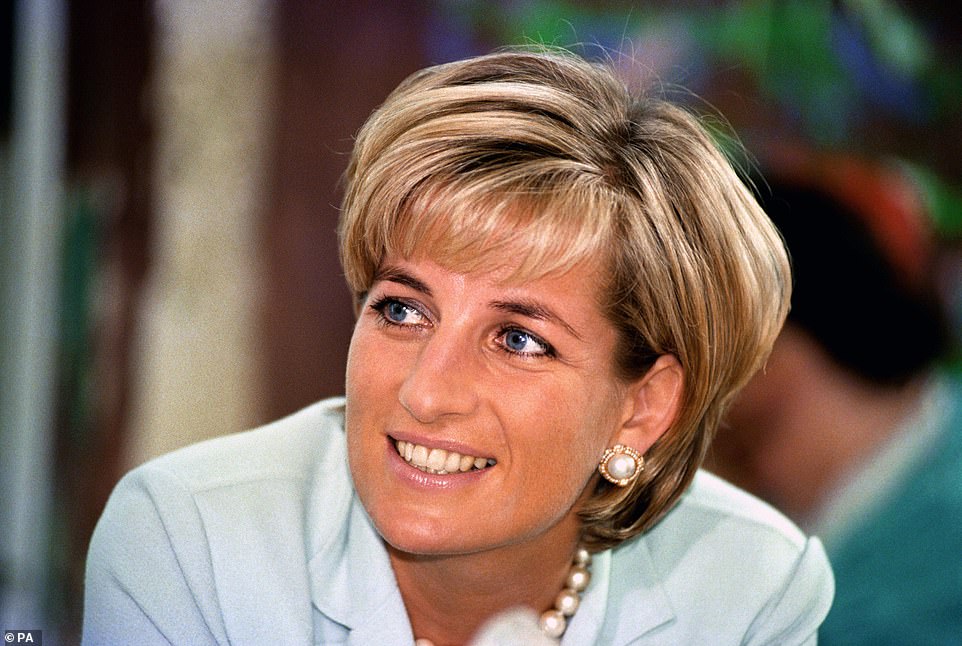 Princess Diana’s former press secretary claimed the late royal was ‘hardened’ by her husband’s ‘infidelities’. Pictured in May 1997

He said that she brought up her history of eating disorders in her speeches at a charity event to turn the table on her critics.

He added that those spreading the rumours were majorly men who had the intention to defend another man by attacking a woman, and that the Princess Diana he worked with for eight years was sane of mind, funny and grounded.

Speaking in another episode, Phil Craig said he feels the briefings were the ‘nastiest part’ of the story of Diana and the King’s marriage.

He recounted how Patrick Jephson set up a meeting between Diana and Jonathan Dimbleby, who at the time was gearing up to interview the King for a programme which was eventually released in 1994. 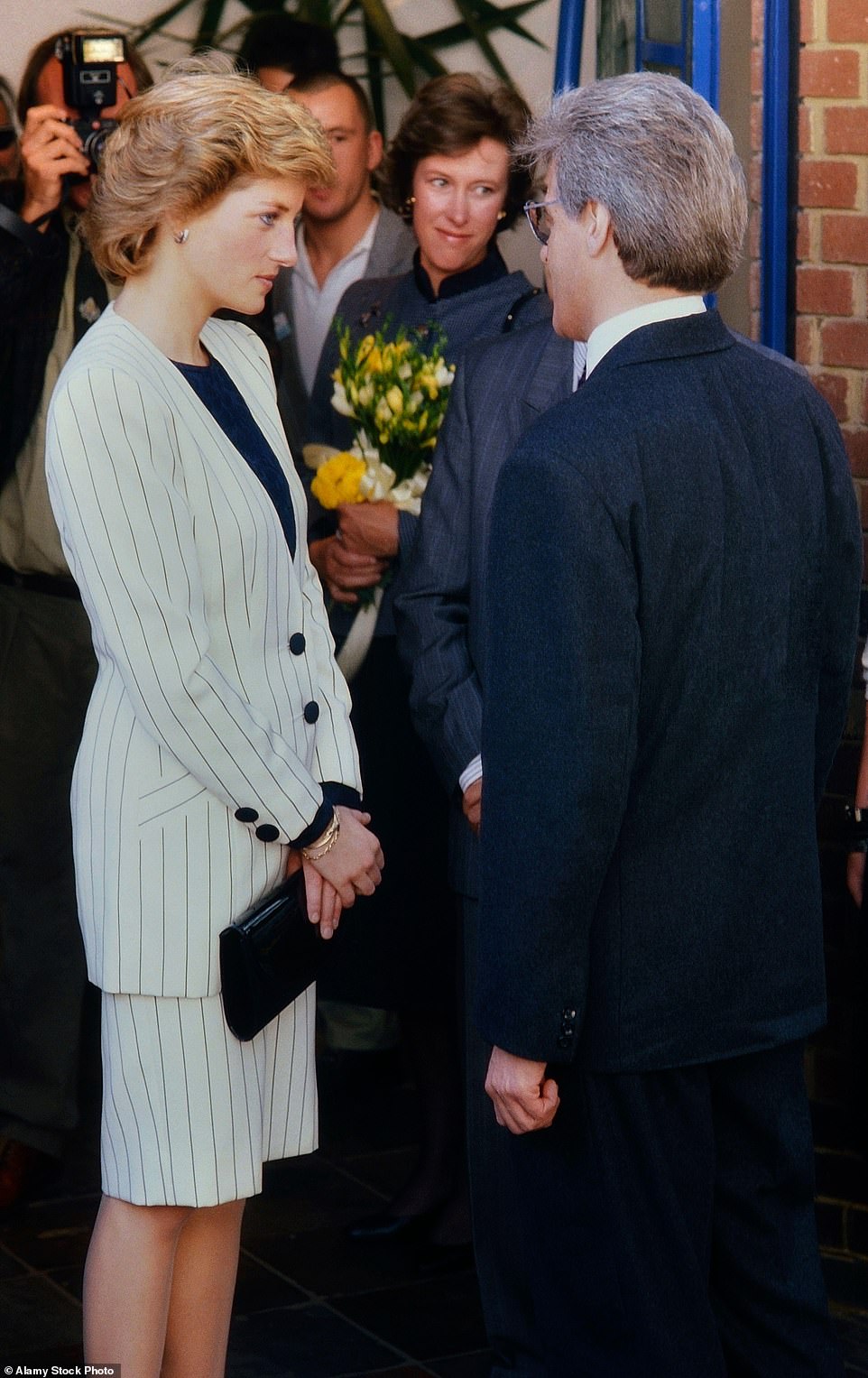 Princess Diana pictured on October 5, 1989 was described by her former press secretary as ‘charming, funny and eloquent’ 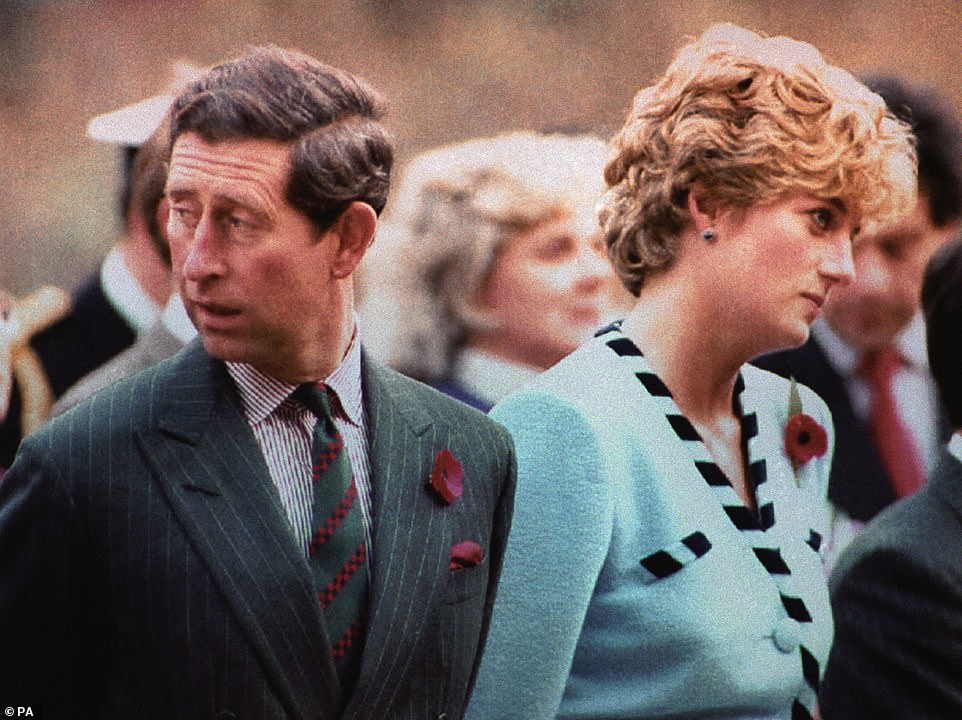 He added that Dimbleby and Patrick Jephson sat down to talk after the interview, and that the Australian broadcaster told the royal secretary: ‘If I can’t believe what I have been told about Diana, I can’t believe any of it.’

‘I wonder if it’s what made Jonathan pull back from his original plan, which was to get into the mental health stuff,’ he added.

The expert added that Diana was ‘hardened’ by the King’s infidelities and the fact that staff would lie to her about his whereabouts.

Phil said he thinks it is ‘appropriate to say that Prince Charles’ gaslit Diana.’ 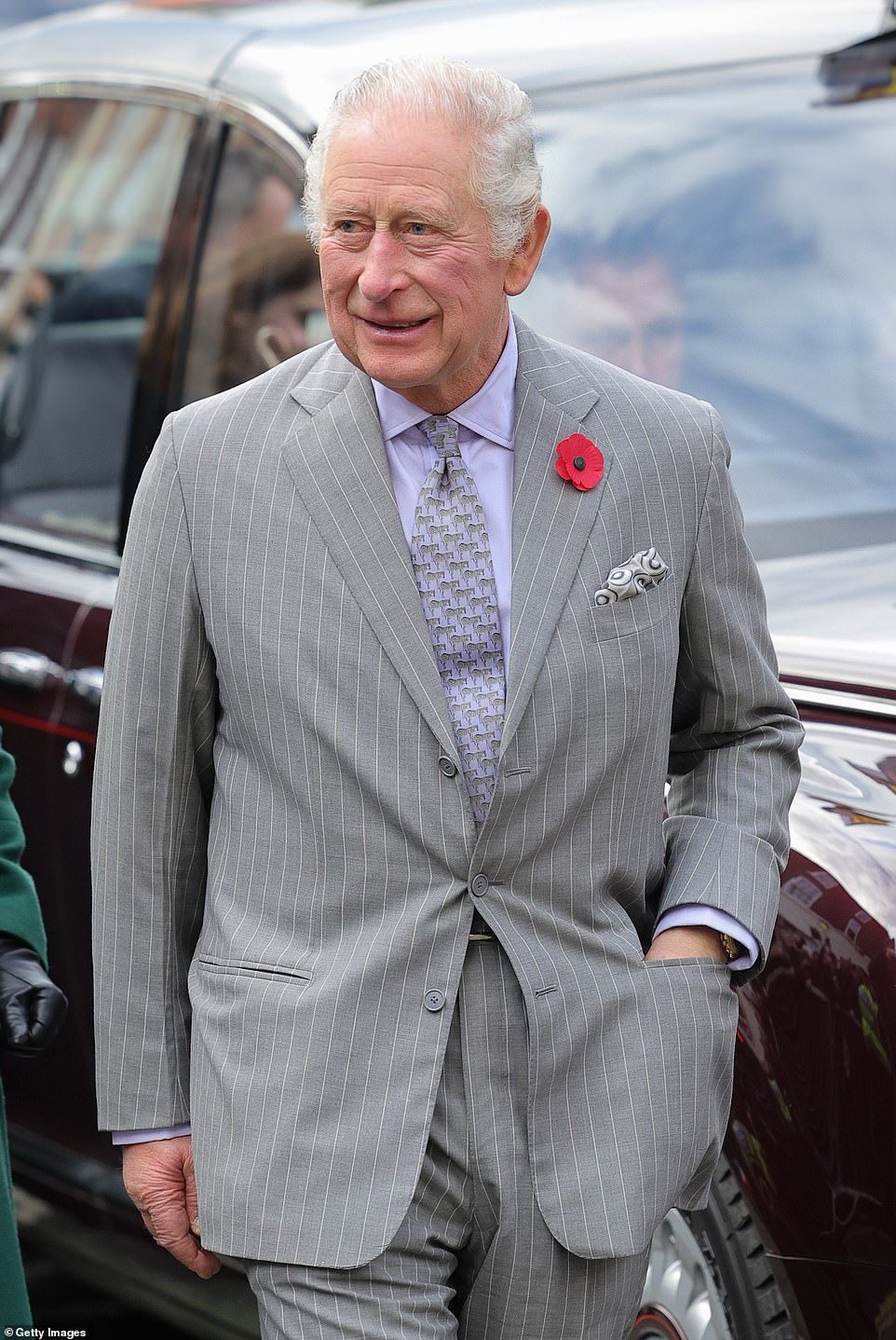 According to Diana’s former press secretary, King Charles ‘held a meeting with a PM about potentially ruling as Regent’. The monarch pictured arriving in York last week

However, the added that the late royal also exaggerated several aspects of her life in a ‘drive for sympathy.’

‘She created this new picture which people bought into, which really wasn’t what happened,’ he said.

‘I do wonder why later on in her life she sort of exaggerated the pain of her own childhood and adolescence.

‘All I can think of is that by the, she was perhaps playing for sympathy,’ he added.

‘She went too far in Morton’s book and she exaggerates too much,’ he added, referencing the Diana in Her Own Words, by Andrew Morton, which was released in 1992.

Cambridge-educated private secretary who was with Diana during her toughest days… who is Patrick Jephson?

Patrick Jephson was Diana’s private secretary for eight years and was also the Princess’s equerry.

He stuck with her from 1988 to 1996 and was responsible for every aspect of her public life.

But, like press secretary, Geoffrey Crawford, he was among a number of Princess Diana’s staff to quit in later 1995 to early 1996.

Mr Jephson quit in January 1996 shortly after the interview aired. Speaking about the decision to the Daily Mail last year, he said: ‘For most of the previous eight years I had been confident that my best way of serving the Queen was to do a good job serving the Princess.

‘But now, for the first time, fighting the Princess’s corner in bare-knuckled legal battles with her husband would directly conflict with the Queen’s expressed wish.

‘For me it was the last straw. In January 1996 my letter of resignation and a deeply uncomfortable farewell meeting with Princess Diana duly followed. In the years since, nothing persuaded me that the Panorama interview was anything but a disaster for her.

‘For the BBC it was, of course, a spectacular success. The programme achieved double the viewer ratings of Jonathan Dimbleby’s ‘adultery’ interview with Prince Charles on ITV the previous year, generated millions of pounds in sales worldwide and collected awards from every quarter.’

The Cambridge-educated Irishman was at the helm during her controversial split from Prince Charles.

He is now a consultant, journalist and author, who is advising the Netflix series The Crown from his home in Washington DC.

Phil said Diana lied about throwing herself down the stairs, a claim she made in the explosive book.

He said he spoke to people who had witnessed the event, and that Diana slipped down a few steps during a row with Charles while she was pregnant with Prince William, but that Charles called the doctor immediately.

Last week, the former press secretary revealed that he had been contacted by Netflix producers to share his experience of working for the Royal Family in the 1990s for the latest series of The Crown.

Writing for The Telegraph, the insider claims that the latest episodes – which landed on the streaming service last week- make for ‘uneasy viewing’ and says some scenes were so real that he ‘forgot to breathe’.

However, the prominent storyline which sees Prince Charles plotting to oust the Queen with John Major is one area that Patrick claims writers went spectacularly wrong.

The first episode of the series is set in 1991, against a background of speculation about the future of the monarchy and Charles’s constitutional role. 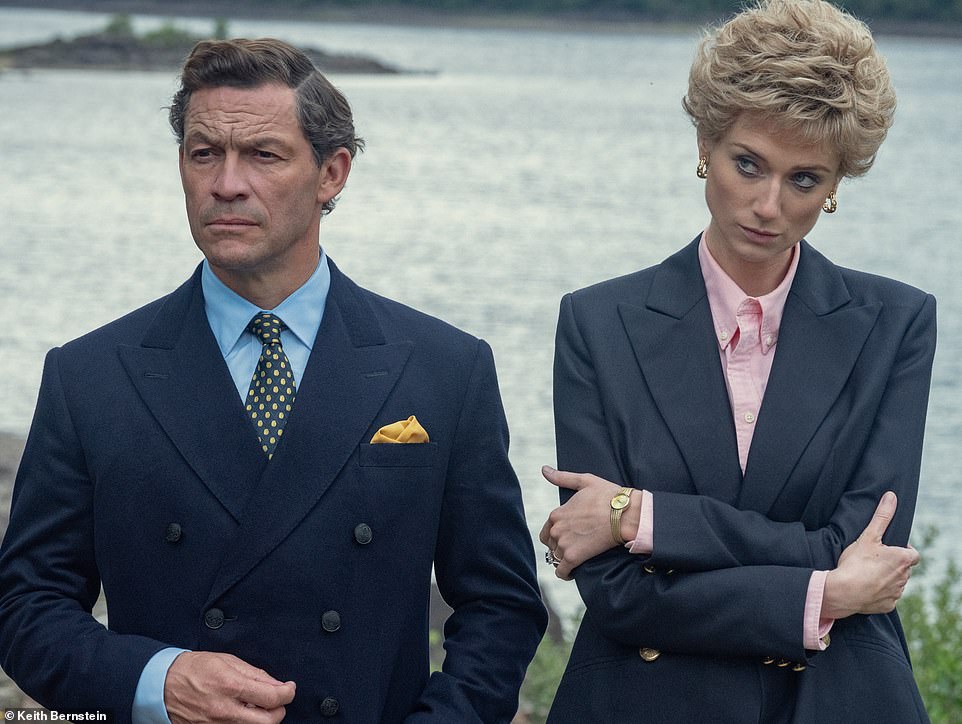 Before filming for fifth season of The Crown began, Patrick was approached by Netflix producers to share his experience of working for the Royal Household. Dominic West and Elizabeth Debicki pictured playing Prince Charles and Princess Diana

During the hour-long episode, Prince Charles – played by Dominic West – is shown a Sunday Times opinion poll which suggested there was public support for The Queen’s abdication, which would result in him ruling as Regent.

The former press secretary writes: ‘We later see Charles discussing the poll and possible regency with the prime minister.

‘Again, this is not strictly accurate: the discussion was actually held with a previous prime minister.’

However, the insider falls short of revealing which Prime Minister the royal allegedly held the meeting with.

The Crown’s writers suggest that Charles believed his mother, then 65, was repeating Queen Victoria’s mistakes by refusing to stand aside for a younger heir.

Last month, Sir John told the Mail on Sunday that the meeting never happened and called the scene a ‘barrel load of malicious nonsense’. 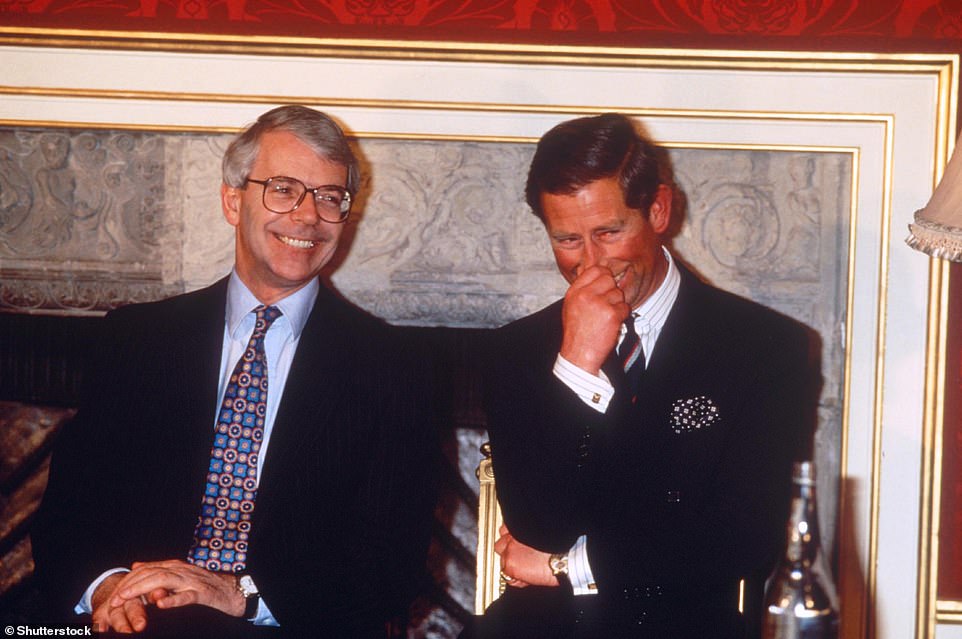 A source said: ‘All the one-to-one conversations you see on screen are utter fiction and some scenes have been entirely created for dramatic and commercial purposes with little regard for the truth. People should be boycotting it.’

What’s more, Princess Diana’s former press secretary revealed that The Crown writers had also fabricated a showdown between the late royal and the Queen where she confesses to giving an interview to Panorama.

In reality, Patrick said he was the one to deliver the news to the Queen’s press office – just moments before they were contacted by the BBC.

Unlike The Crown’s dramatisation, the insider claimed that Diana ‘absolutely failed to summon up the necessary courage’ to tell the monarch about the explosive interview and instead sat next to Patrick in the car as he called the monarch’s press secretary.

In another scene, Prince Charles and Princess Diana are depicted getting into a fierce argument on their ‘second honeymoon’ in the Mediterranean in 1991 after the late royal suggested going on a shopping trip.

While the dramatisation shows the couple feuding on a family holiday, the expert claims this exchange actually took place two years previously in front of their hosts on a royal tour of the Middle East.