A powerful storm that battered California with widespread flooding and heavy snowfall is now heading east into the Central United States.

The storm pummeled northern California over the weekend, stalling traffic and prompting water rescues and evacuation orders – and 15 million people are now under winter weather alerts.

At least three people have died from the treacherous conditions, including one person found dead inside a completely submerged car Saturday in Sacramento County and a 72-year-old man who died after being struck by a fallen tree at a Santa Cruz park.

Another was rescued from a submerged vehicle along with two others, but was stuck in the heavy floods and later died of hypothermia at a local hospital. 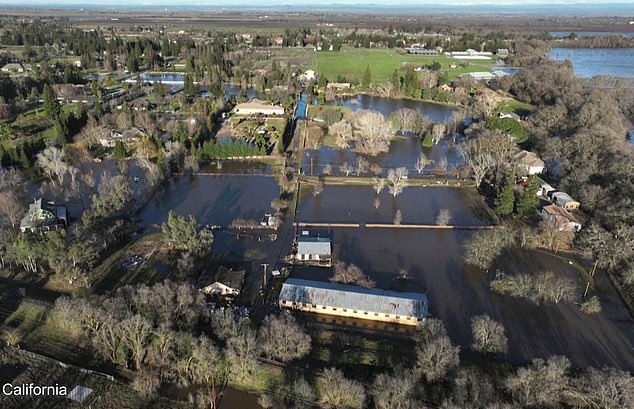 Wilton, California was completely flooded after a levee broke nearby following a devastating storm over the weekend 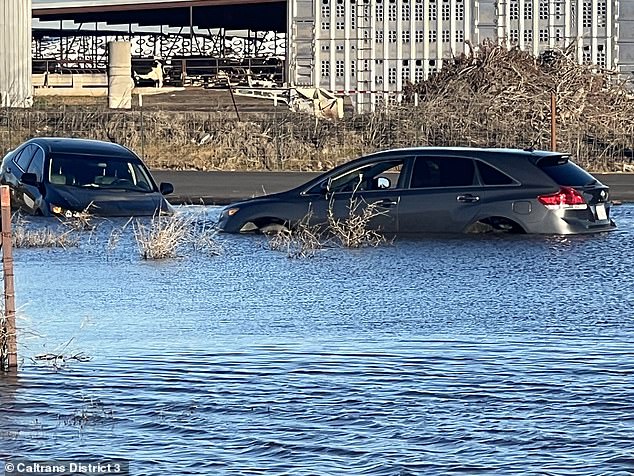 Cars were left submerged on major highways across Sacramento County 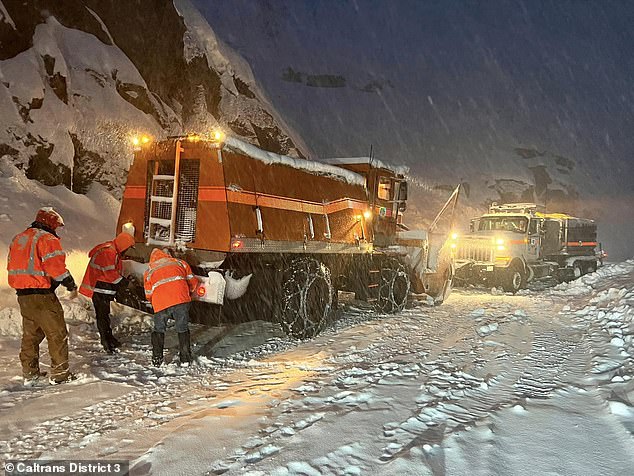 Near the Nevada border, heavy snowfall stalled trucks and forced officials to close off roadways

And as of Monday, more than 50,000 Californians remained without power — down from a high of 300,000 on Saturday. Meanwhile, in nearby Nevada, over 22,000 are without power, according to PowerOutage.us.

More than 15 million people from the West Coast through Illinois are now under winter weather alerts from the storm, with conditions set to worsen through mid-week.

Snow is now expected to fall across the Rocky Mountains, northern Plains and parts of the Midwest Monday afternoon, dropping four to eight inches of snow along the way. Higher elevations, however, could see up to two feet of slush.

Meanwhile, in the South, a severe storm outbreak is possible from Monday to Tuesday, as parts of severe Texas, Oklahoma, Arkansas, and Louisiana are under severe storm watches. 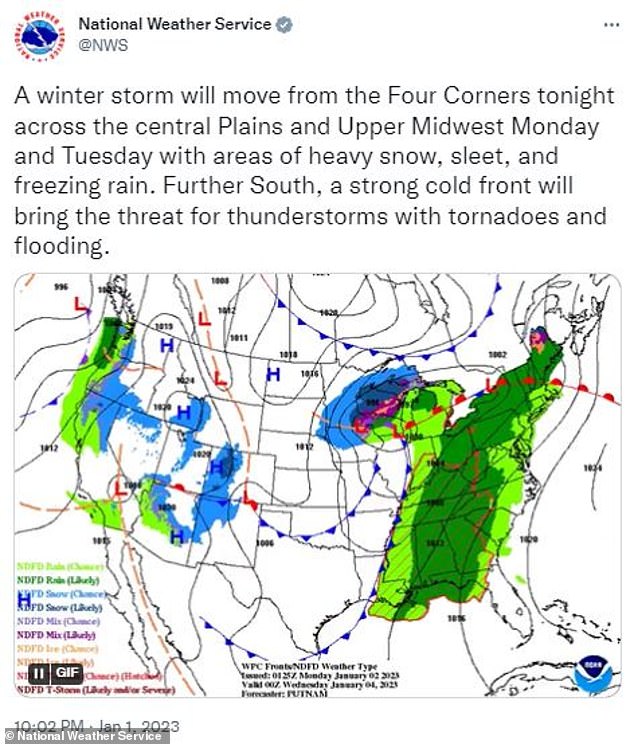 Those areas could see damaging winds, strong tornadoes and even hail beginning Monday afternoon and lasting in the overnight areas.

As the National Weather Service warned on Twitter: ‘A winter storm will move from the Four Corners tonight across the central Plains and Upper Midwest Monday and Tuesday with areas of heavy snow, sleet and freezing rain.

‘Further south, a strong cold front will bring the threat for thunderstorms with tornadoes and flooding.’

The storm is being attributed to a so-called atmospheric river — a region in the atmosphere that can carry moisture for thousands of miles.

That ‘river’ has already devastated the Sacramento area, where emergency crews spent the weekend rescuing multiple flood victims by boats and helicopter, and responding to calls of fallen trees and disabled vehicles stuck in the flood waters.

An evacuation order was issued on Sunday for the rural Sacramento County areas of Point Pleasant — just one day after rising flood waters forced evacuations in Wilton, California as well as three communities near the city of Watsonville in Santa Cruz County. 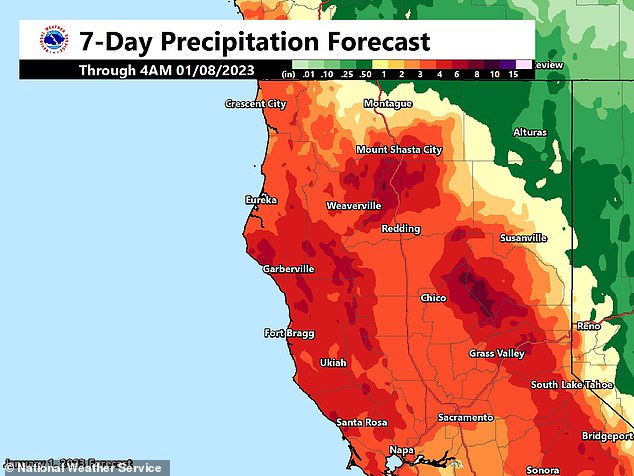 A flash flood watch was also in place along and west of Freeway 5 leading to the Sacramento River, where there were already concerns about excessive rainfall and flooding.

A levee was ultimately overtopped and breached by the Cosumnes River on Saturday night due to the heavy rainfall, leaving Wilton under water. And on Sunday morning, Sacramento County spokesman Matt Robinson said helicopter images showed there was a second levee that was breached.

Residents in areas near Interstate 5 were told to ‘prepare to leave the area now before roadways are cut off to evacuate the area.’

The Sacramento County Office of Emergency Services also urged residents in the rural area to move their livestock to high ground.

The highway was later closed south of Elk Grove in Sacramento County,

Sacramento County officials were ultimately forced to issue a local state of emergency. 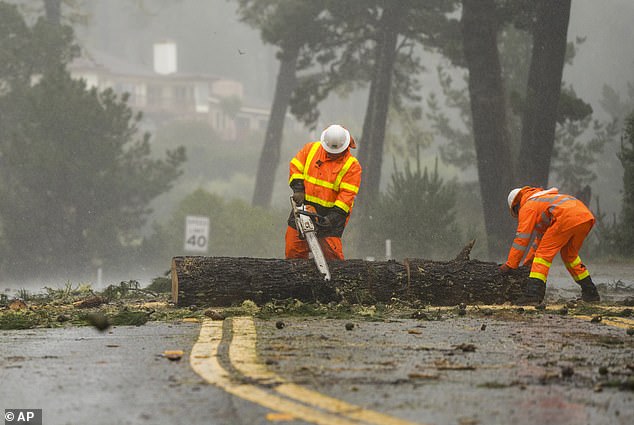 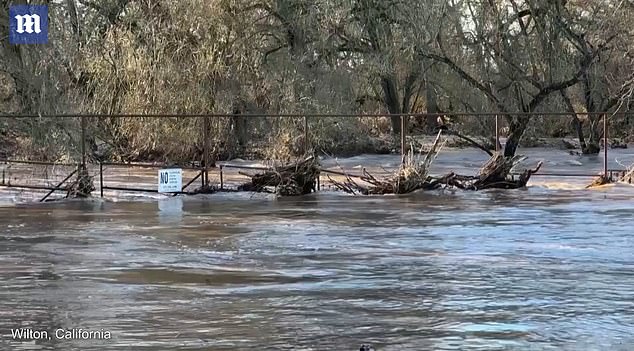 Streets in rural Wilton, California were completely submerged under water from the storm 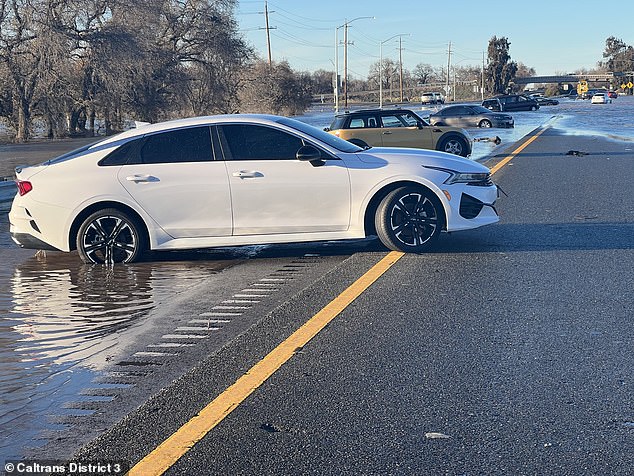 More than a dozen abandoned vehicles were submerged under water, while some 50 occupied cars not underwater were stranded nearby

According to Dan Quiggle, the deputy fire chief for operations for the Cosumnes Community Service District Fire Department, three to four dozen motorists had to be rescued from Highway 99 since midnight as personnel used large vehicles, boats and helicopters to ferry motorists away from the floodwaters.

California Highway Patrol incident logs also reported more than a dozen abandoned vehicles were submerged under water, while some 50 occupied cars not underwater were stranded nearby.

Most of those who were rescued were not injured, local officials told the Sacramento Bee, and were brought to Barbara Morse Wackford Community and Aquatic Complex in Elk Grove to be reunited with their family.

Others who did suffer minor injuries were brought to local hospitals. 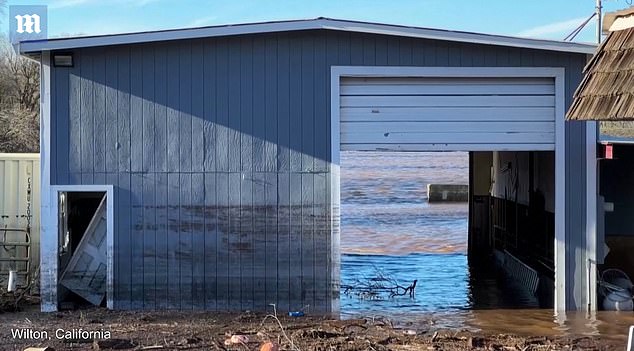 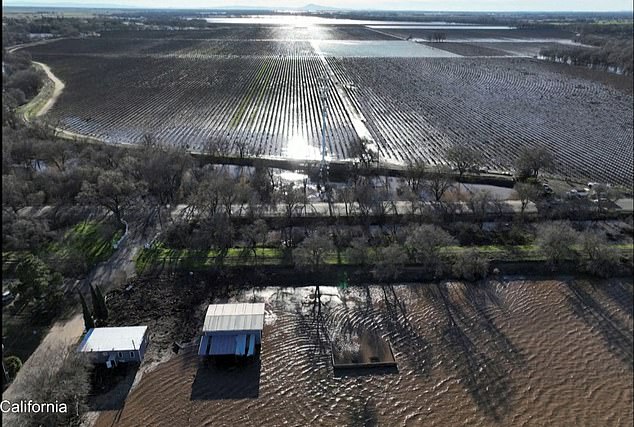 A levee was overtopped and breached by the Cosumnes River on Saturday night due to the heavy rainfall, leaving rural Wilton under water 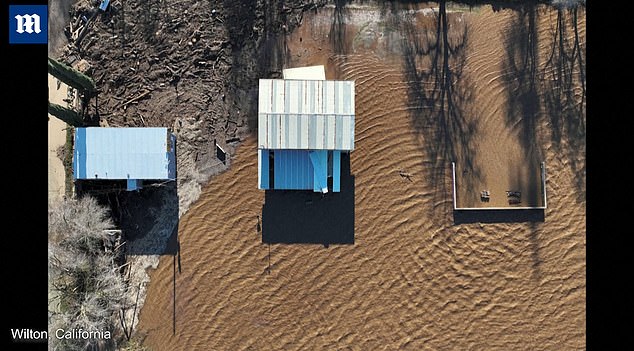 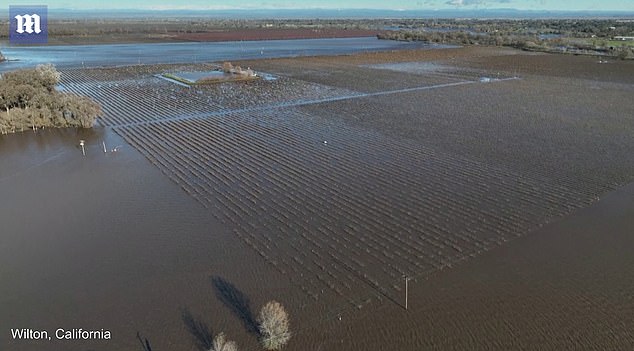 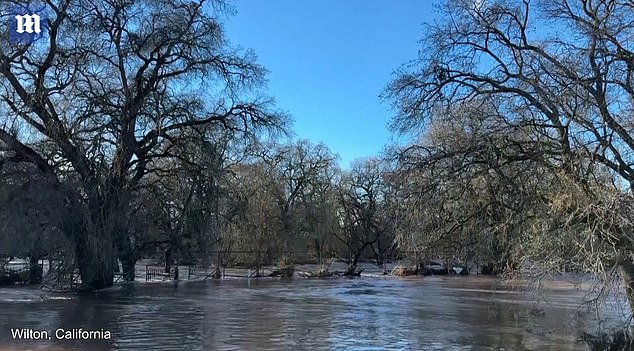 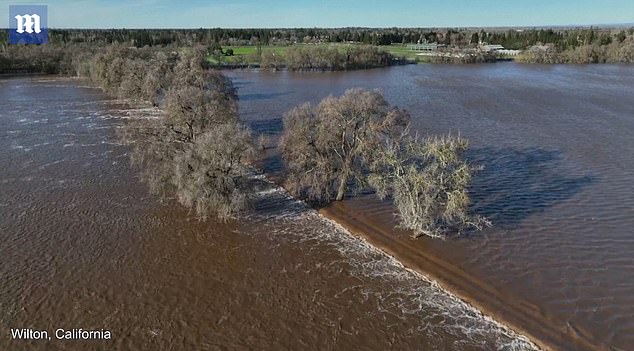 In one dramatic rescue, three people were spotted in a vehicle that became stranded on Highway 99.

A helicopter technician was lowered down in a rescue basket and pulled two of the people off the roof of the vehicle and carried them one-by-one into the chopper.

But a third person was under the water and had to be airlifted to a local hospital with hypothermia and other conditions related to being in the water for an undetermined amount of time. That person, who has not been named, later died.

Rachel Thorpe also told the Bee how she was driving early Sunday from her home in Acampo to her job as a nurse in the Emergency Room at Kaiser Permanente South Sacramento Medical Center when she saw that Highway 99 was closed ahead.

She said she decided to exit the highway and make her way onto I-5 instead.

‘I was following a couple of cars, and before I knew it, we were in water,’ Thorpe recounted later in the day. ‘It was like a flash flood, and it just kind of swept us out.’

At that point, Thorpe said she realized she needed help and called her husband, Jamey. As she waited for him, she climbed onto the roof of her car to get to safety.

‘I really thought I was going to die to be honest,’ she said. 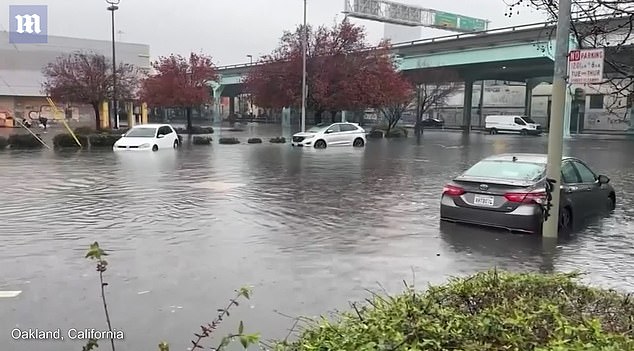 Oakland, California recorded its wettest day on record with 4.75 inches 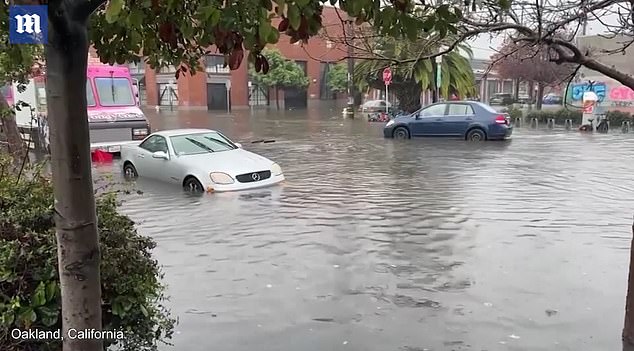 Cars are seen submerged in the streets of Oakland, California over the weekend 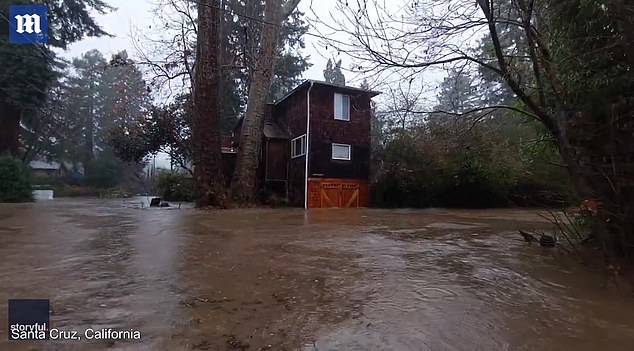 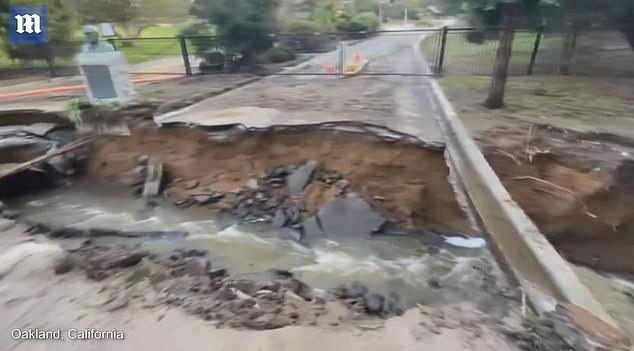 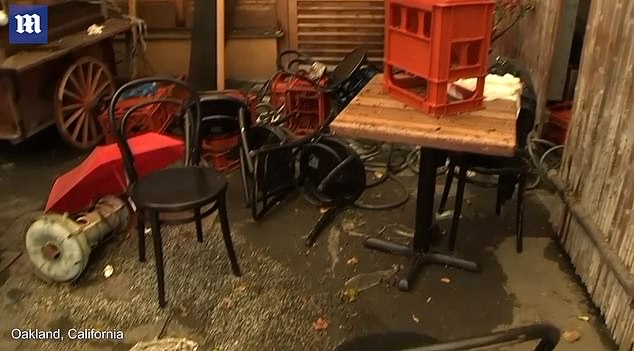 Floodwaters rushed into residents’ homes, and prompted the evacuation of some residents 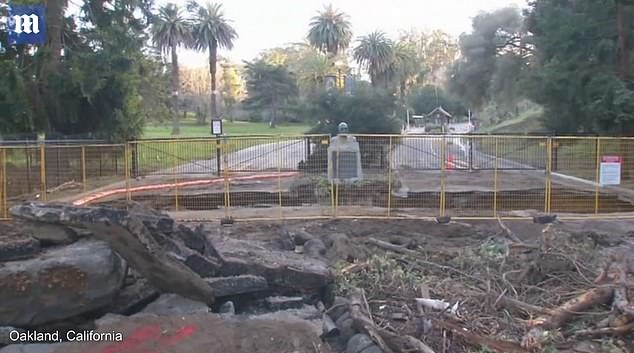 But the storm was not limited to just Sacramento County, as other parts of California found itself under feet of snow or inundated by heavy rainfall.

Chris Schamber, the fire captain of the Cosumnes Fire Department, told KCRA that ‘dozens upon dozens’ of people had also been rescued from US Highway 101 — one of California’s most famous routes.

It was temporarily closed in both directions in southern San Francisco on Saturday, when the California Highway Patrol reported that ‘water is not receding due to non-stop rainfall and high tides, preventing the water to displace.’

San Francisco recorded 5.46 inches of rain on Saturday — the second-highest total in more than 170 years, while nearby Oakland had its wettest day on record with 4.75 inches. 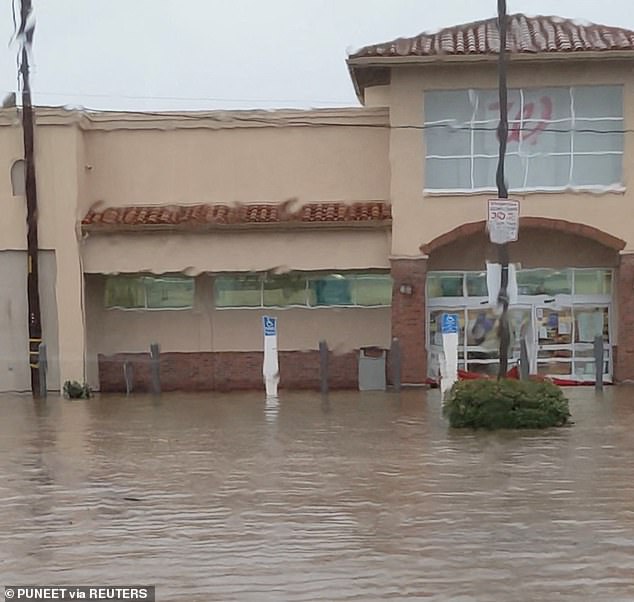 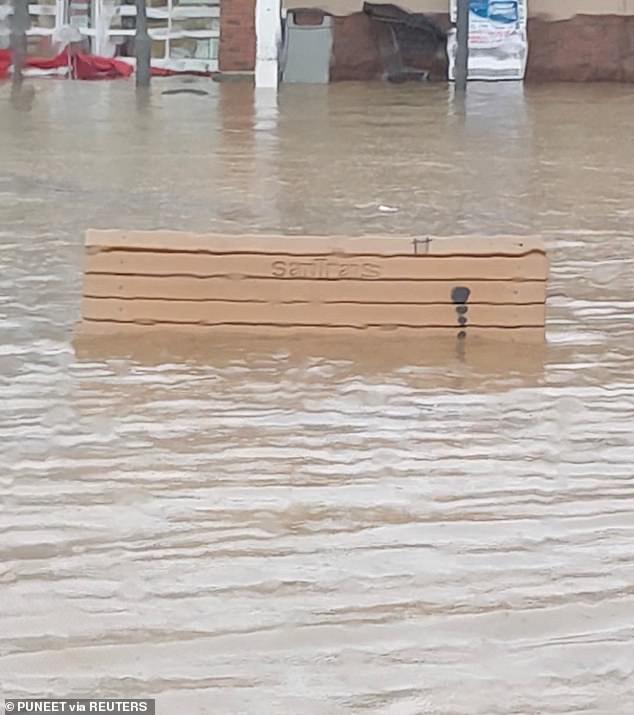 The Fern Lodge Inc. Christian Science Nursing home called the fire department for help after water sloshed into the building, creating dangerous conditions for the wheelchair-bound and medically vulnerable seniors.

But by 11am, the rain was pounding so heavily that emergency responders could no longer drive along the winding streets leading to the facility, which borders a creek that had swollen into a ‘raging river,’ Sheriff Sgt. Stuart Barnes said.

Fortunately, sheriff’s deputies who were summoned to the scene were able to find an alternative path — by asking the owner of a nearby property to open his gate so they could cut through his driveway to reach the nursing home.

‘It was one of those situations where you had to improvise,’ said Sgt. Brandon Dennington.

He and other deputies eventually reached the lodge and escorted the residents into vans. And when two people could not communicate and were unable to leave their wheelchairs, deputies and paramedics ripped seats out of the van to transport them to safety.

None of the displaced residents were injured, authorities say, and county officials were able to find temporary shelter for all of them. 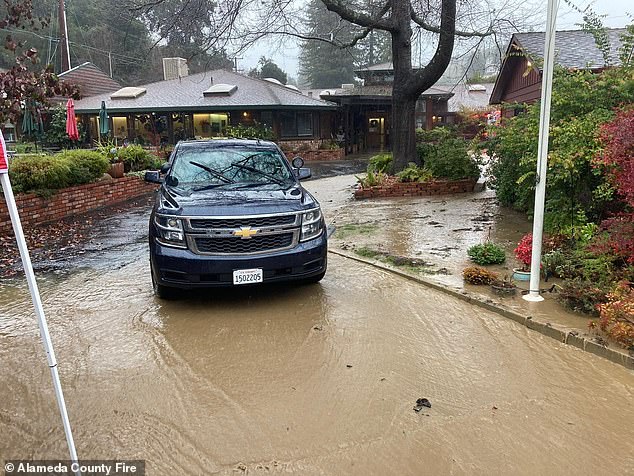 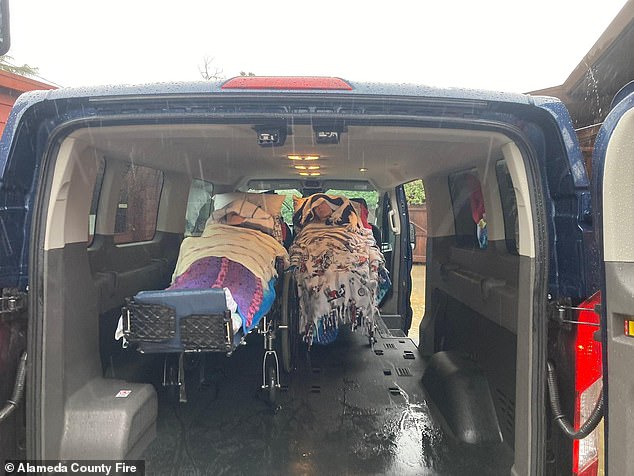 Further east, near the Nevada border, I-80 was closed briefly because of heavy snow that caused spinouts, collisions and poor driving conditions as dozens of drivers were rescued  from the area.

The road later reopened, the Wall Street Journal reports, but drivers were required to use tire chains to make it through the heavy snow.

Highway 50, near El Dorado National Park, was also shut down for several hours after several large boulders fell onto the roadway. Fortunately, no vehicles were damaged.

Sierra locations above 5,000 feet received around 20 to 45 inches of snow Saturday through early Sunday morning, according to CNN. 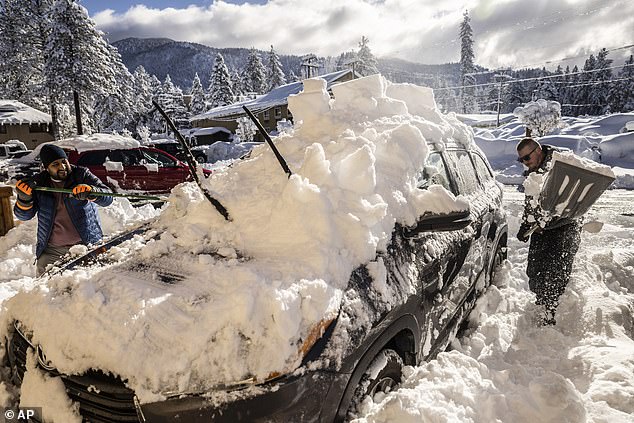 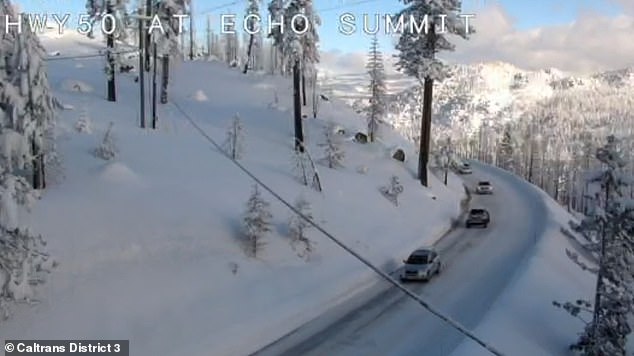 Officials closed Interstate 80 and Highway 50 during the storm, and only reopened I-80 in the aftermath to vehicles with chains on their tires 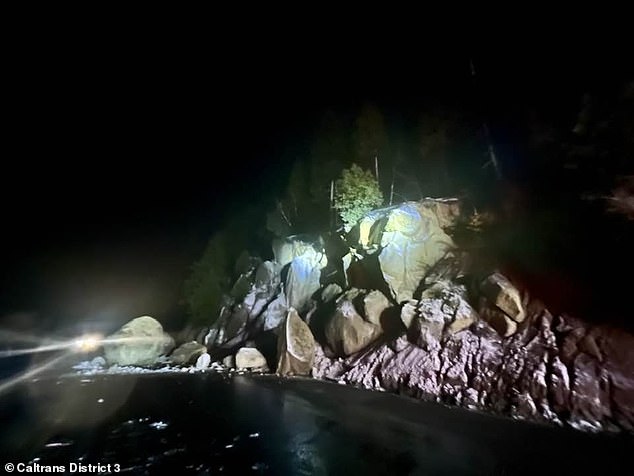 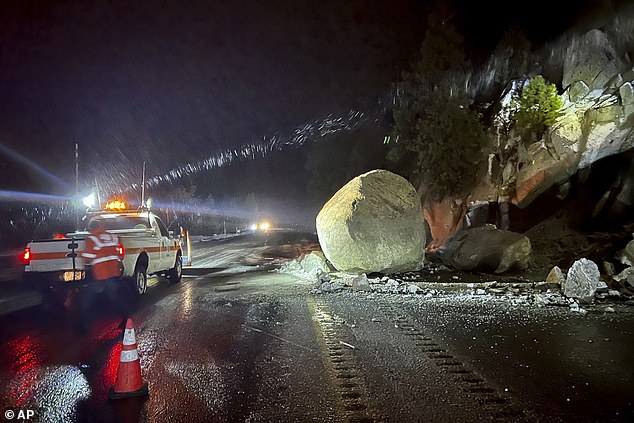 California, though, is not in the clear yet — with another round of storms expected in the coming days.

It is expected to see light to moderate rain in the Valley areas.

And in the mountains, there will be light to moderate snow from Monday to Tuesday, with conditions worsening on Wednesday.

At that point, Sacramento County is expected to see more rain, heavy snow and wind gusts potentially reaching up 50mph.

More flooding from the Cosumnes River is also possible, with Hannah Chandler-Cooley, a meteorologist with the National Weather Service, telling the Sacramento Bee: ‘The Cosumnes right now is an evolving situation.

‘We’re taking that hour by hour at this point.’