‘We heard seven super loud explosions…everyone was screaming’: Seattle high school students reveal terror in class as gunman storms in and shoots one dead, as shooter is caught at nearby bus stop

By Joseph Michalitsianos for Dailymail.Com

Students inside the Seattle high school where a student was shot and killed Tuesday morning described a terrifying and chaotic scene.

Students at Ingraham High School described hearing “seven super loud explosions,” hiding in dark closets as they heard “everyone screaming” and frantically texting their parents as the school was locked down as authorities searched for the gunman.

A student was killed in the shooting, which authorities suspect was a targeted attack, rather than a random act of violence.

A male suspect was detained aboard a bus near the school about an hour after the shooting. Police said they found a gun in his backpack.

The school was closed for nearly two hours as desperate parents waited outside to join their children.

Police have not shared any information about the suspect, but the victim was confirmed to be a student and reports suggest he was male. The identities of both remain unknown.

The victim was initially taken to a nearby hospital with life-threatening injuries, but later succumbed to them. 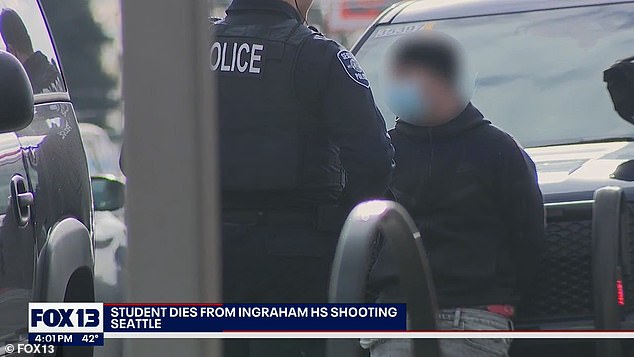 The suspect in the school shooting is seen being arrested at a bus stop near the school. 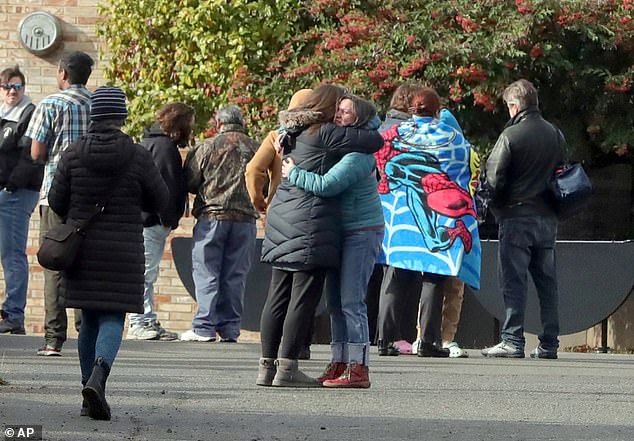 Parents take comfort as they wait outside Ingraham High School in Seattle after Tuesday’s shooting. 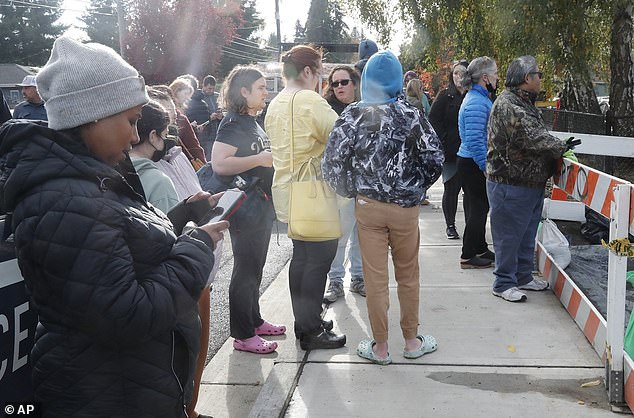 Student Zack McCarthy said News that he was playing Ode to Joy on the piano in his music class when he heard gunshots.

“We heard like seven super loud bangs, and at first we thought it’s like the locker, right? Because nobody thinks that the school is going to be shot. Then the teacher runs over and says, no, we have to close the door, then everyone starts freaking out.

“We heard screaming, and people were screaming that there was a gun and stuff, it was super scary.”

Grant Pinney said he was in the hallway when the shooting broke out and then ran into the nearest classroom.

“I ran into a random class, we all ran into the band room, turned off the lights and locked the doors, and then just hid. And then we came across a closet, and it was completely dark in there, no one said a word. It was quite surreal.

Tomas Barr also described hearing a series of loud bangs before his teacher locked the door, turned off the lights and helped students hide during lockdown. 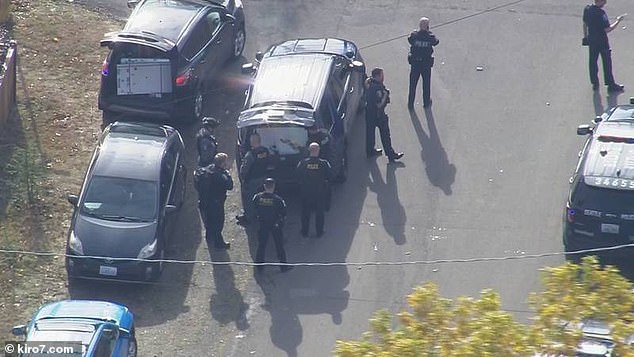 Police gather near the scene of a Seattle high school where a victim was shot and has fatal injuries, but police have arrested a suspect. 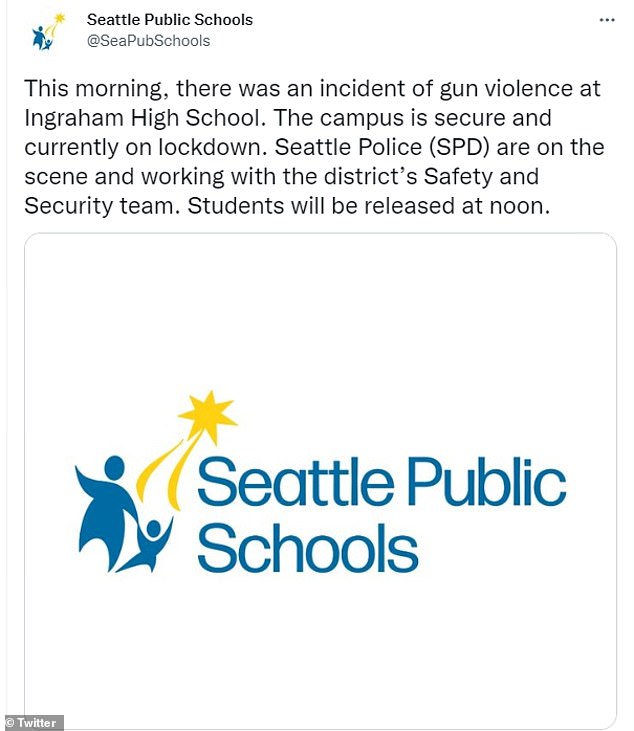 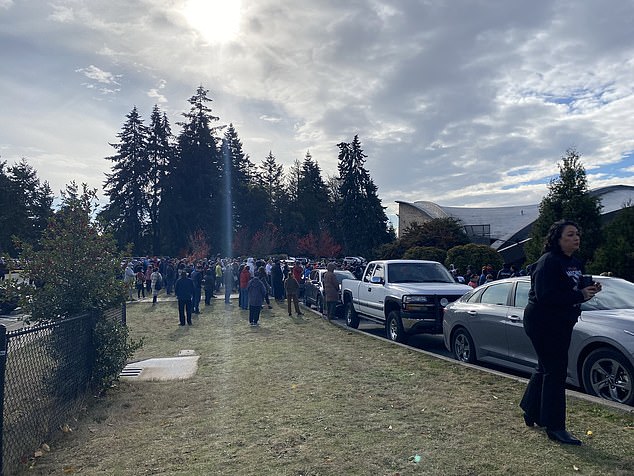 The students were released and greeted by cheering parents at a nearby reunification site. 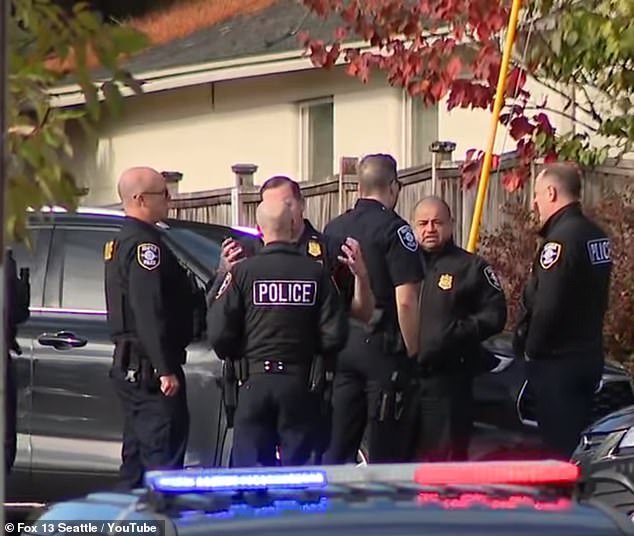 The victim was taken by ambulance to Harborview Medical Center.

The male suspect was found an hour after police were called when officers searched the area, Seattle Police Chief Adrian Diaz said.

Witnesses said the suspect was arrested at a nearby bus stop as dozens of heavily armed officers swarmed the area. He did not resist arrest.

After classes were secured, the students were released and greeted by cheering parents at a nearby reunification site.

The victim was taken by ambulance to Harborview Medical Center and police are asking residents to avoid the area. 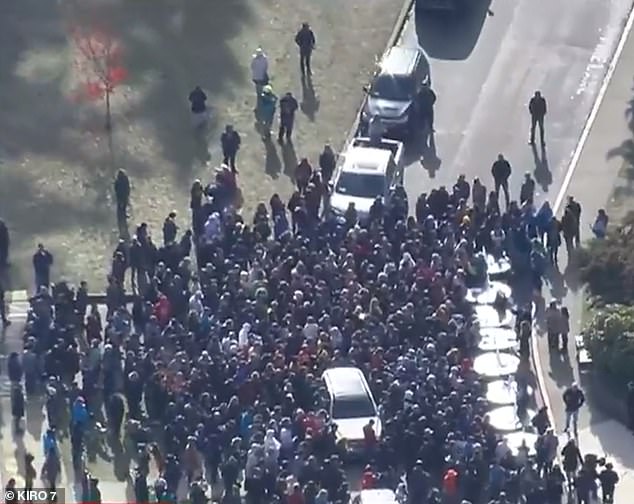 Masses of parents gathered at the reunification site and anxiously waited for the students to leave school.

A parent who saw how the victim was treated told KIRO7 that they were “very saddened by what happened.”

“I couldn’t stop crying, my heart just sank,” the father said. ‘I don’t know why we live in a society like this.’

Another parent of a freshman said his son texted him saying they were on lockdown. He added that there is a rumor that the shooter has been removed from the property.