Vladimir Putin has been exposed using actors to pose as soldiers and wearing bulletproof vests under his suit for his annual televised New Year’s speech.

The 70-year-old Russian president delivered the speech flanked by dozens of soldiers who were presented as having fought in Ukraine.

However, eagle-eyed viewers have pointed out that several of the alleged soldiers have appeared in previous Russian propaganda videos featuring Putin.

The hoax suggests that Putin is so paranoid about his position being threatened amid the failures in Ukraine that he is doing everything he can to avoid meeting the general public. 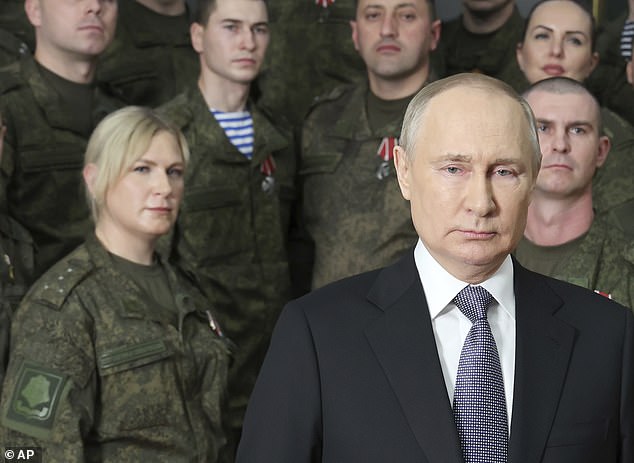 Vladimir Putin has been accused of hiring actors to pose as soldiers and wearing bulletproof vests under his suit for his annual televised New Year’s speech. Pictured left: Putin has seen a blonde woman, said to be a ‘doctor’, in other public appearances.

Social media users compared photos from past appearances to match several people seen around Putin on more than one occasion, suggesting they are actors or even members of his security detail.

One of the actors is a blonde woman seen standing over Putin’s right shoulder. Like the others, she is seen in military clothing after being given a medal by the Russian despot before her, and she looks between him and the camera.

In the broadcast, the Russian president awarded her a medal as a senior captain in the army medical service named Anna Sidorenko.

But this isn’t the first time she’s been seen with Putin: the mysterious woman was once nicknamed Agent Cornetto, after she was spotted selling Putin ice cream when he visited an air show.

This was not his first appearance at his events either, Radio Liberty-linked media outlet Sibir.Realii noted in the wake of Putin’s speech.

The suspicion is that if it is the same woman, it is a trusted member of their security team rather than a military medic. At the very least, she’s been seen as an actress before, posing as various members of the public.

“Realii has noticed that one of the military who was behind Putin during his televised speech was a woman who appeared several times in shots with the president, in various roles,” the outlet said. 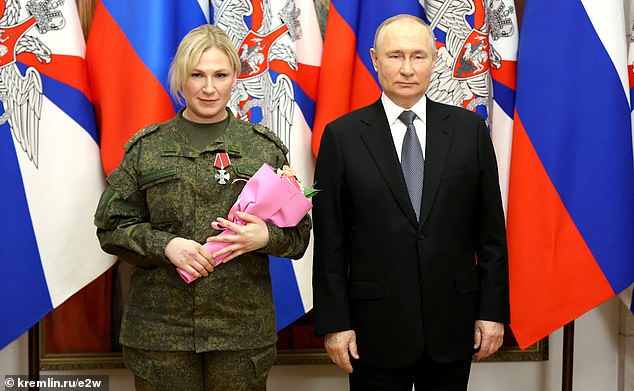 Putin is seen awarding the mysterious blonde woman a medal before his New Year’s TV speech. 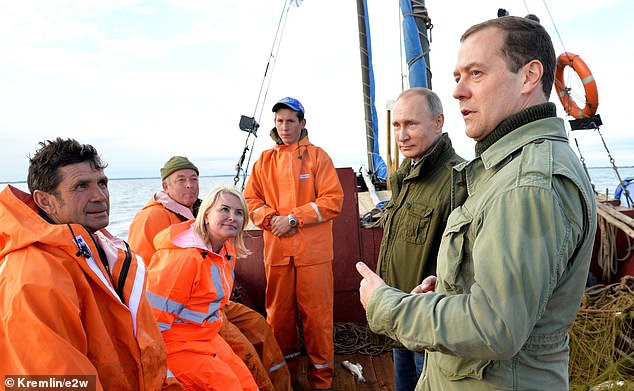 A woman, who social media users have said is the same one who stood behind Putin during his New Year’s speech, is seen dressed as a sailor in an earlier appearance by the Russian president. 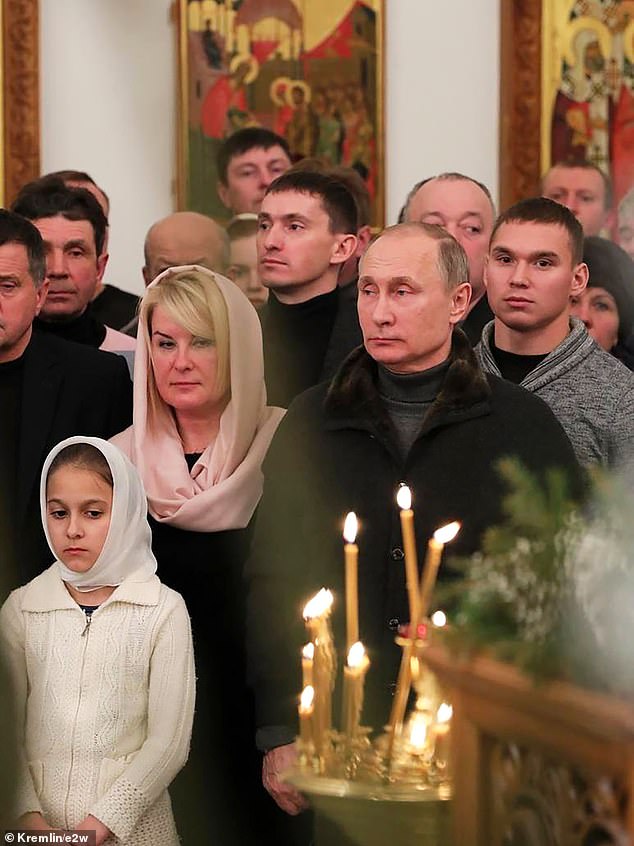 A woman, believed to be the same person seen during Putin’s New Year’s speech, stands near the Russian president during a church appearance.

“In September 2016, the president was photographed on a lake in the Novgorod region together with fishermen, she was among them,” the outlet said.

The woman was photographed alongside the Russian president wearing high-visibility orange clothing.

‘And in January 2017, these same people were noticed in a [Orthodox] Christmas service in a Novgorod monastery.’

Most were seen as their security agents rather than actual fishermen.

Two others have been photographed with the mystery women on numerous occasions, also posing as fishermen and churchgoers.

In 2017 and 2019, Putin “bought ice cream from the same vendor at the International Aviation and Space Salon.”

At the Moscow aviation show, the blonde saleswoman was identified as Ekaterina Safonova, but is believed to be the same woman as at the other outings.

In 2019, she served Putin ice cream when he treated visiting Turkish leader Recep Tayyip Erdoğan to a vanilla cone. He had given the Kremlin leader a snack in the same place two years earlier.

Sources at the air show said his only role was to serve Putin and after doing so he disappeared. 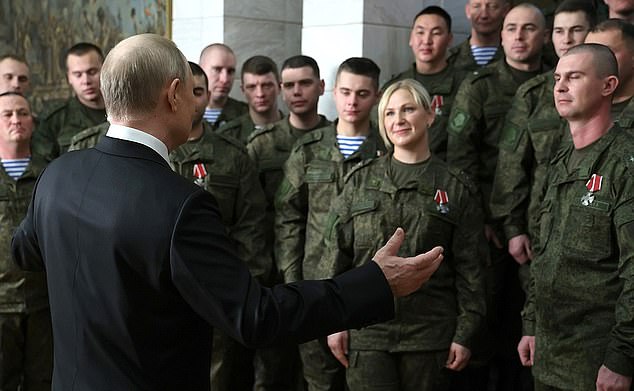 The outline of what some commentators have said appears to be a bulletproof vest can be seen under Putin’s suit, suggesting that the Russian president was taking more precautions.

The Moskovsky Komsomolets newspaper speculated that she is a colonel in the FSO, the Federal Protection Service, which is tasked with protecting the president.

Previous claims about ‘Agent Cornetto’ led to allegations that Putin uses his own security agents to pose as ordinary people, so he doesn’t have to meet members of the public.

Health or safety concerns may be a reason behind such action.

Sibir.Realii’s claim sparked a lively debate on social media in Russia about whether the people in the New Year’s broadcast were the same as in previous appearances.

Several images from Putin’s previous public events were shared, with Twitter users creating composite images and circling people who appeared on more than one occasion as “members of the public” meeting the president.

The weary dictator delivered his speech from the headquarters of the Southern Military District near Ukraine, his officials said.

Amid rumors about his failing health and his fight against cancer, he claimed to be guiding the Russians towards “our common future, our true independence”. He coughed and spluttered several times during his nine-minute speech.

Online commentators suggested Putin’s speech was a poor imitation of Ukrainian President Volodymyr Zelensky’s risky visit to the war front, in which he was seen shaking hands with soldiers and handing out awards.

Co-winner of the 2022 Nobel Peace Prize, Oleksandra Matviichuk, wrote: “Putin wanted to copy Zelensky, who went to the Ukrainian defenders in Bakhmut. But after ten months of full-scale war, even actors are in short supply in Russia.