Thousands of mourners have lined up to pay their respects to Pope Emeritus Benedict XVI at St Peter’s Basilica – where he will lie in state for three days before a ‘simple’ funeral at the Vatican on Thursday.

The doors of the basilica were swung open just after 9am today so the public, some of whom had waited for hours, could visit the late pontiff.

The frail 95-year-old died at 9.34am on Saturday in the Vatican monastery – where he had lived since his shock retirement in 2013. He was the first pope to retire from the papacy in 600 years.

His body – dressed in a mitre, the headgear of a bishop, and a red cloak-like vestment in preparation – was placed on a simple dais, with two Swiss guards standing on either side as mourners walked by. 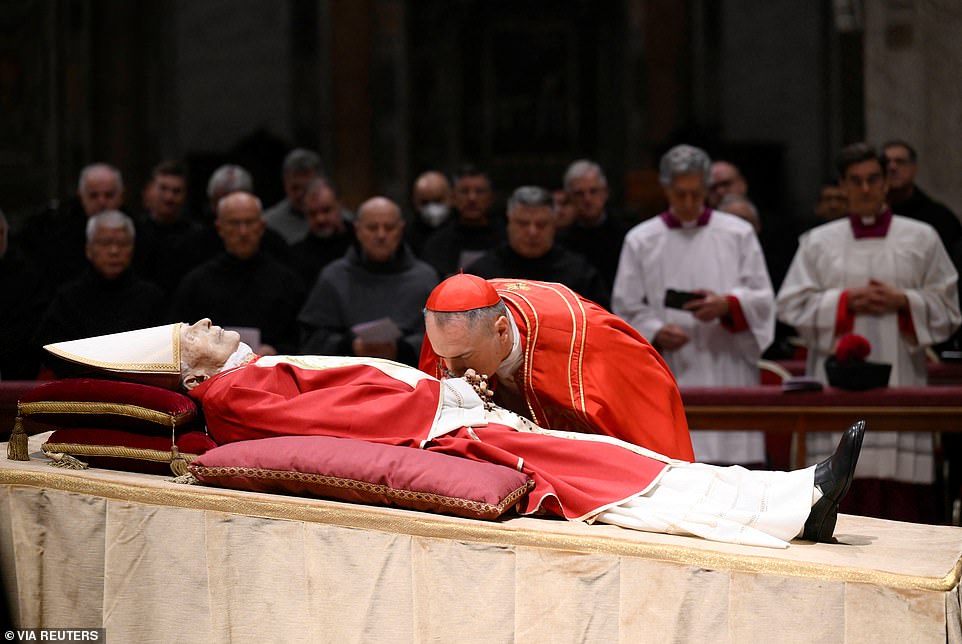 The body of Pope Benedict on public display at St Peter’s Basilica at the Vatican, where the public pay their respects 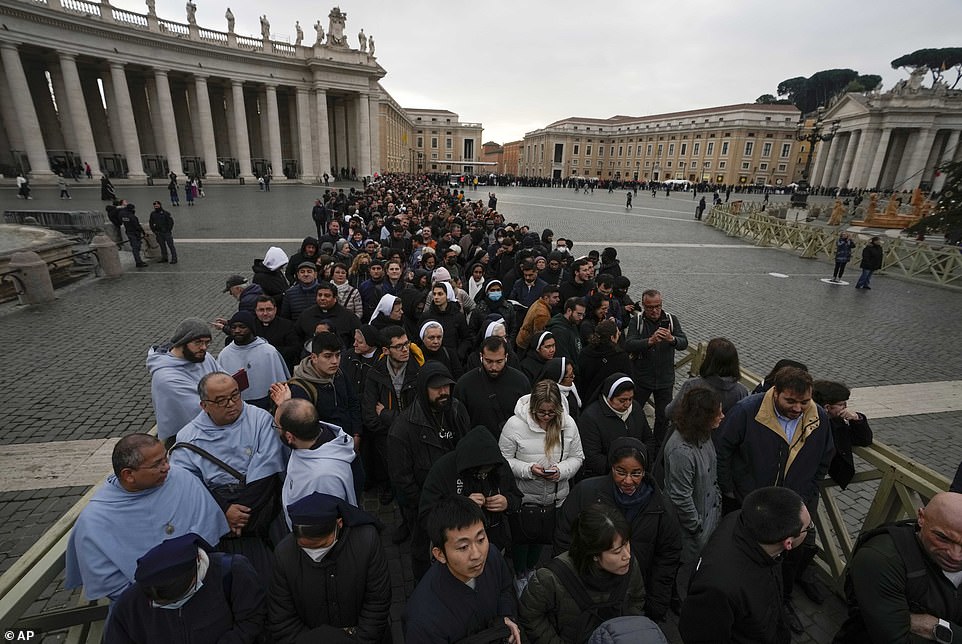 A large queue formed to enter the basilica in order to see Benedict, who was the first pope to retire in 600 years in 2013 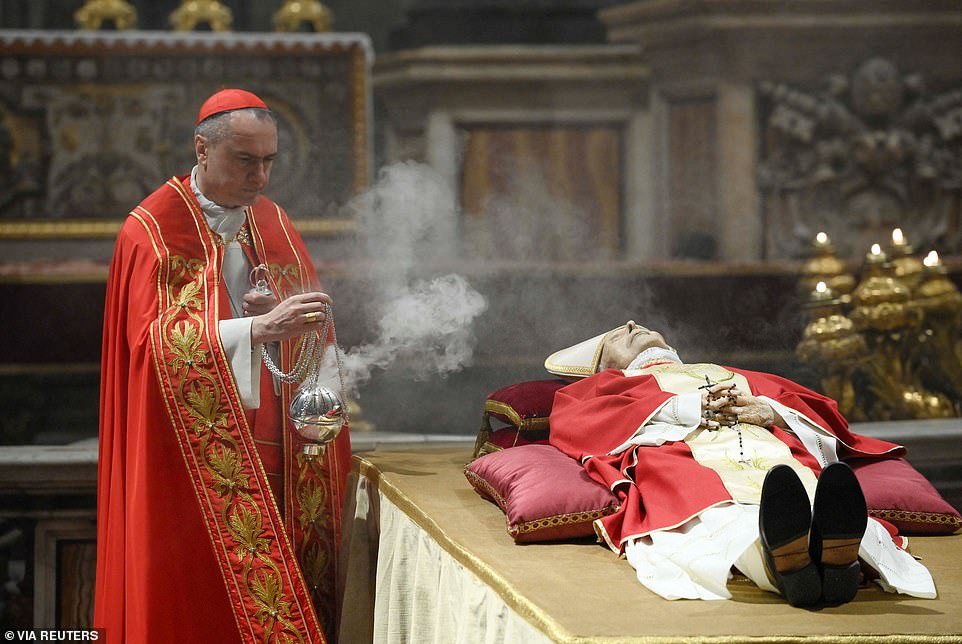 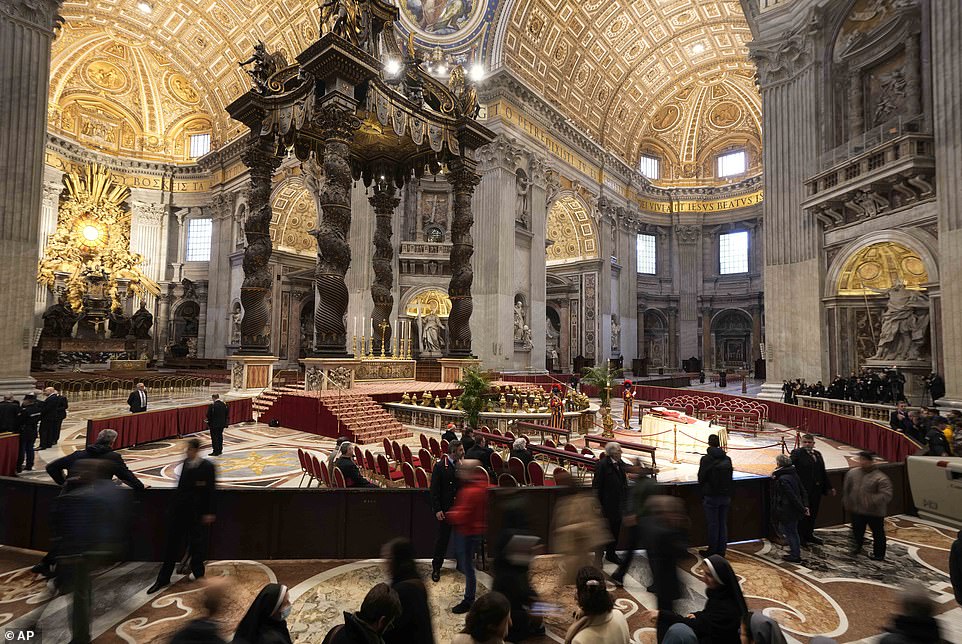 People inside St Peter’s Basilica looking at the body of Pope Benedict, who died at 9.34am on Saturday 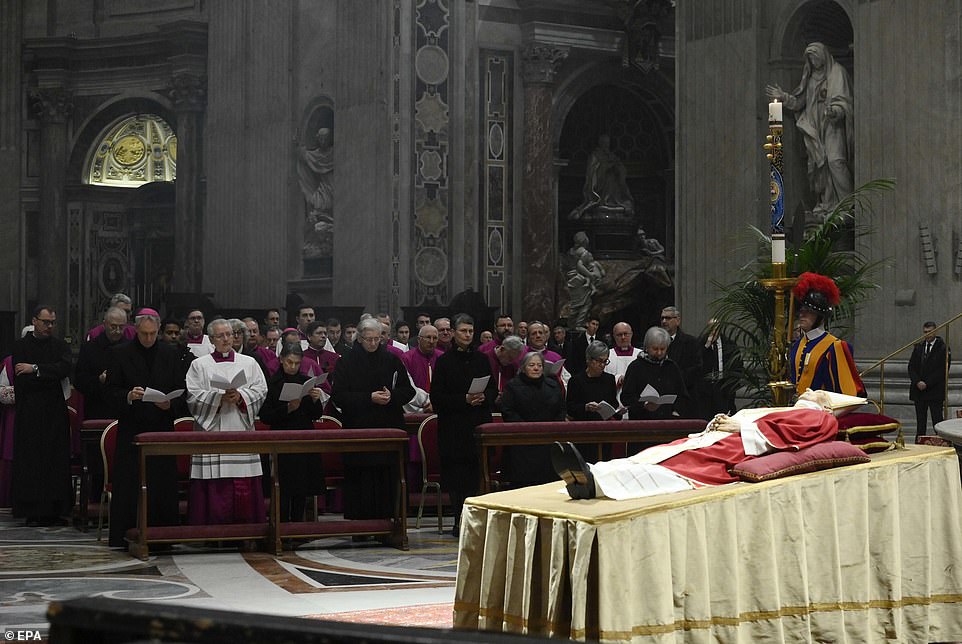 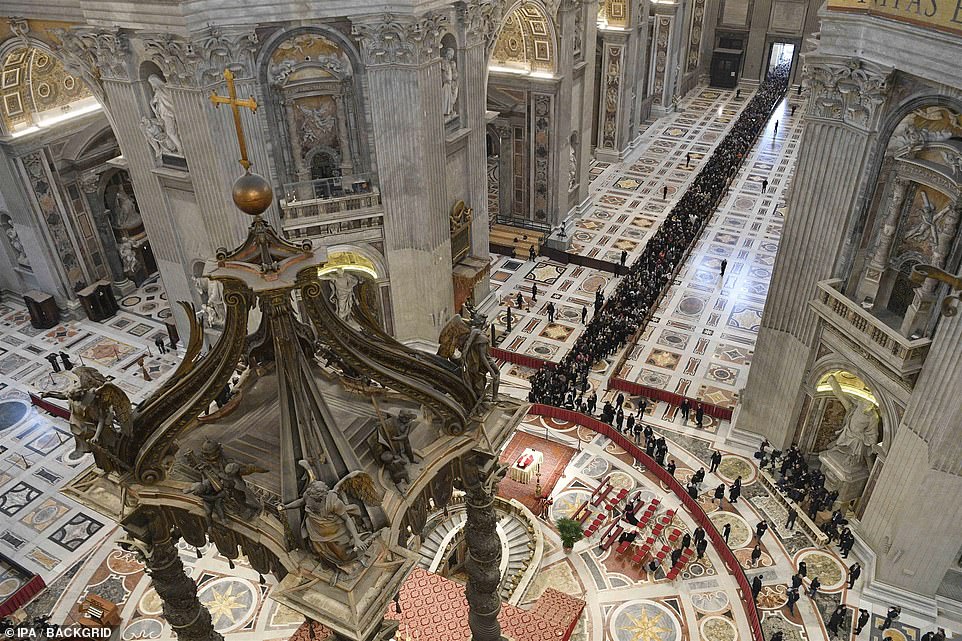 Huge queues formed to look at the body of the late former pope, who is laid in state at St Peter’s Basilica for the next three days

Before the rank-and-file faithful were allowed into the basilica, prayers were intoned and a small cloud of incense was released near the body, its hands clasped on its chest.

By mid-morning the queue to enter the basilica snaked around St Peter’s Square.

Once allowed to enter, the public filed up the centre aisle to pass by the bier with its cloth draping.

While the number of visitors was large, there were no signs of the huge crowds who came to pay their respects to Pope John Paul II in 2005, when millions waited for hours to enter the basilica.

Last night, Benedict’s long-time secretary, Archbishop Georg Gaenswein, and a handful of consecrated laywomen who served in his household, followed a van by foot in a silent procession toward the basilica.

Some of the women stretched out a hand to touch the body with respect.

Benedict’s time as pope was filled with controversy, including his alleged mishandling of child abuse cases, misleading investigators, rehabilitating a Holocaust survivor and antagonising Muslims by suggesting Islam was inherently violent.

He also said the use of condoms in the fight against Aids only worsened the problem, sparking international outrage. He also claimed in his autobiography, Benedict XVI: A Life, that ‘a century ago, anyone would have thought it absurd to talk about homosexual marriage.’

However Benedict did order an inquiry into abuse in Ireland, resulting in the resignations of several bishops.

But last year, an independent report in his native Germany found that between 1977 and 1982 he had failed to take action in four cases of sexual abuse when he was Archbishop of Munich. 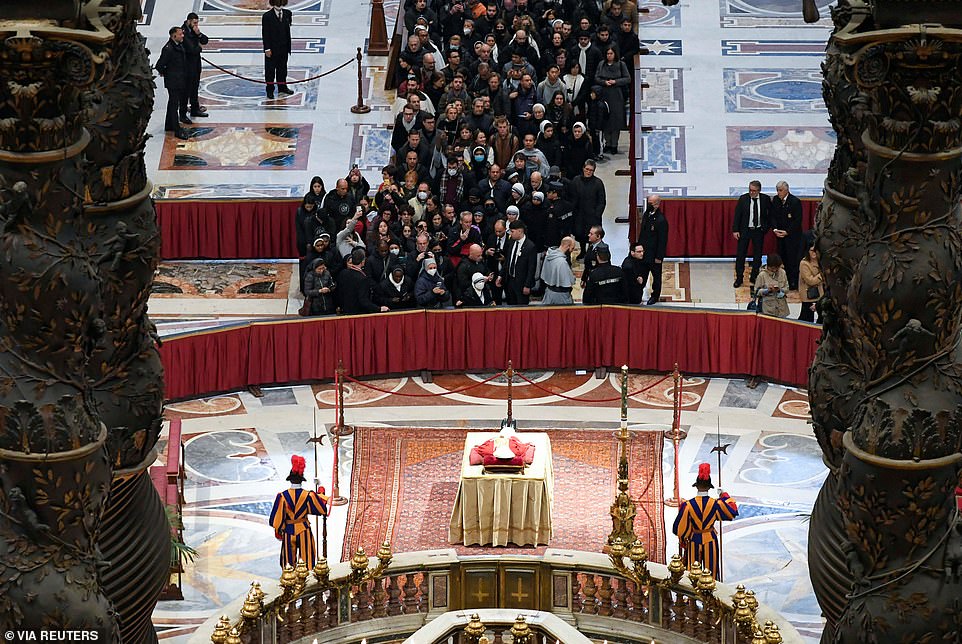 The doors of the basilica were swung open just after 9am today so the public, some of whom had waited for hours, could pay their respects to the late pontiff 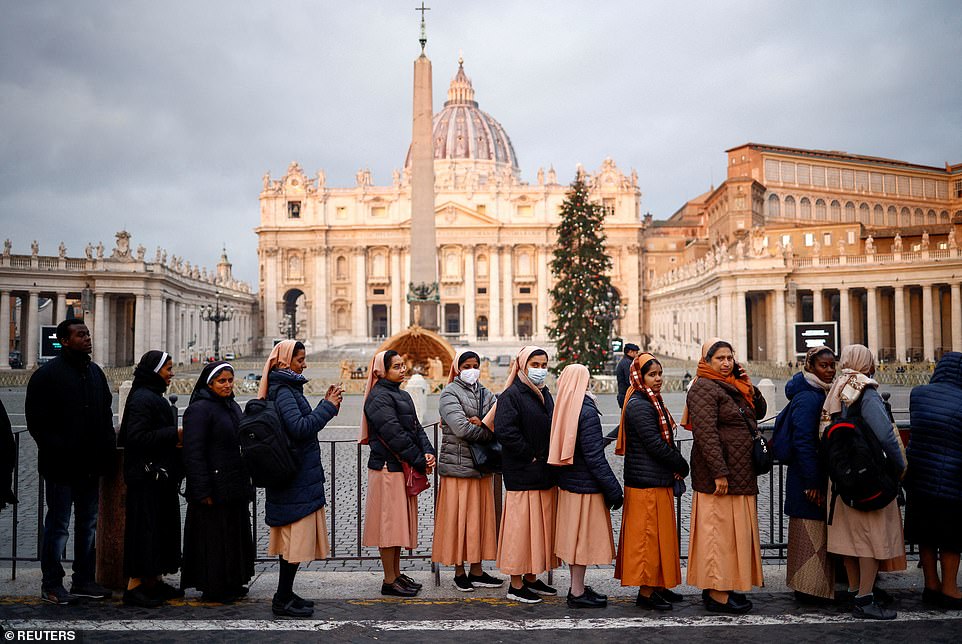 By mid-morning, the queue to enter the basilica snaked around St Peter’s Square 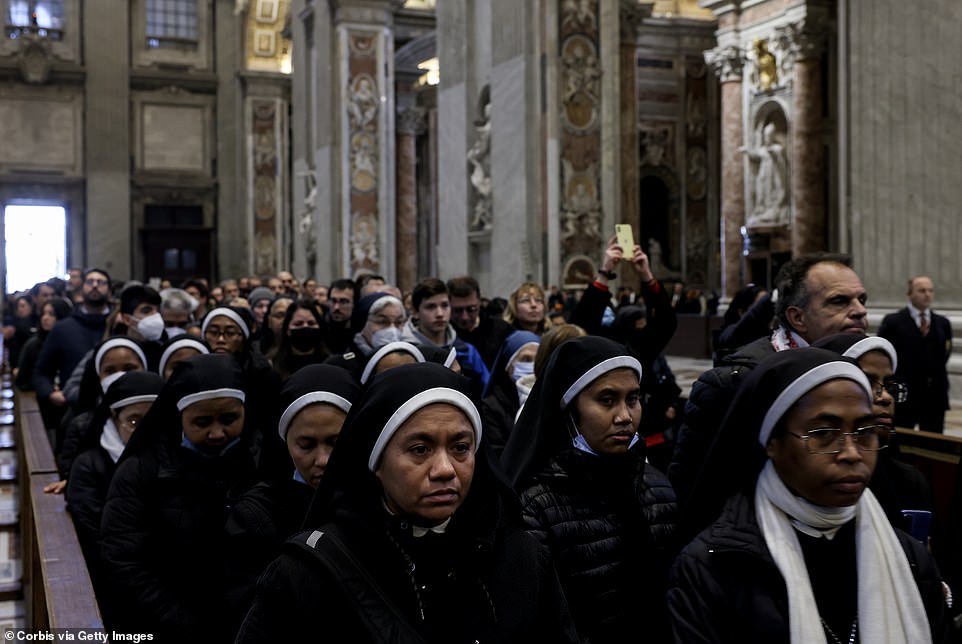 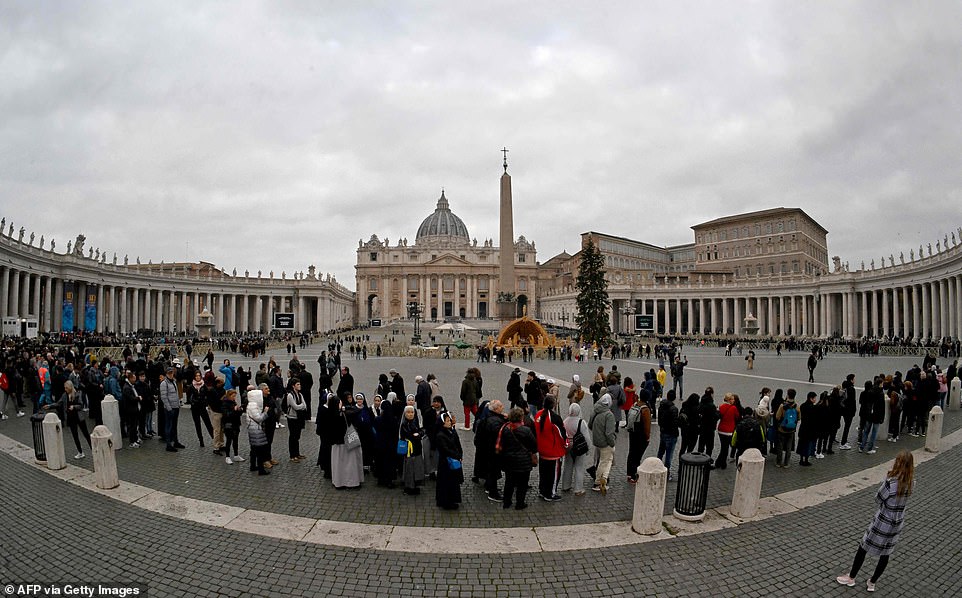 While the number of visitors was large, there were no signs of the huge crowds who came to pay their respects to Pope John Paul II in 2005 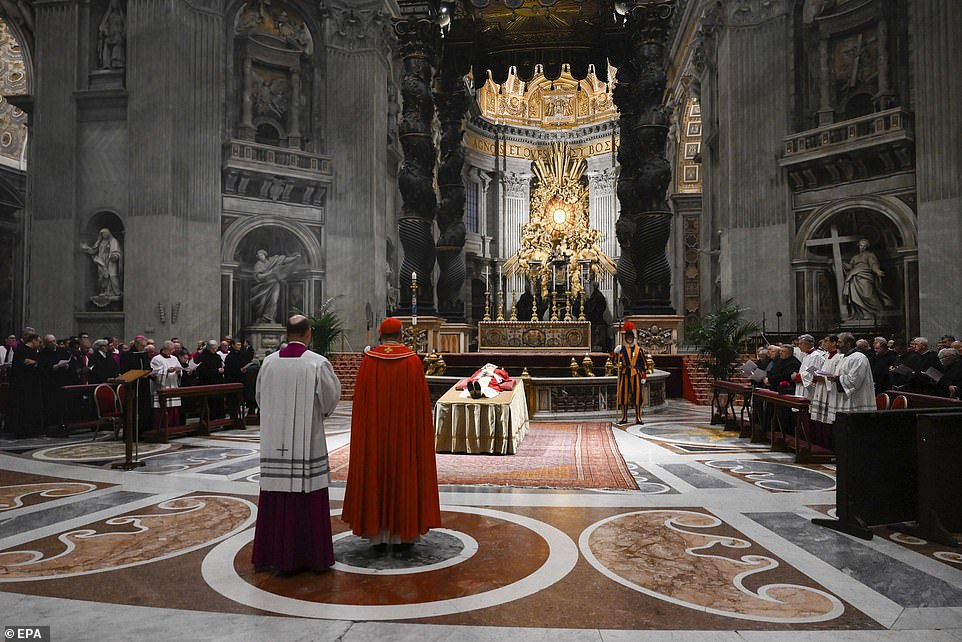 The Vatican has said Benedict’s funeral on Thursday will be a simple, solemn and sober ceremony in keeping with his wishes 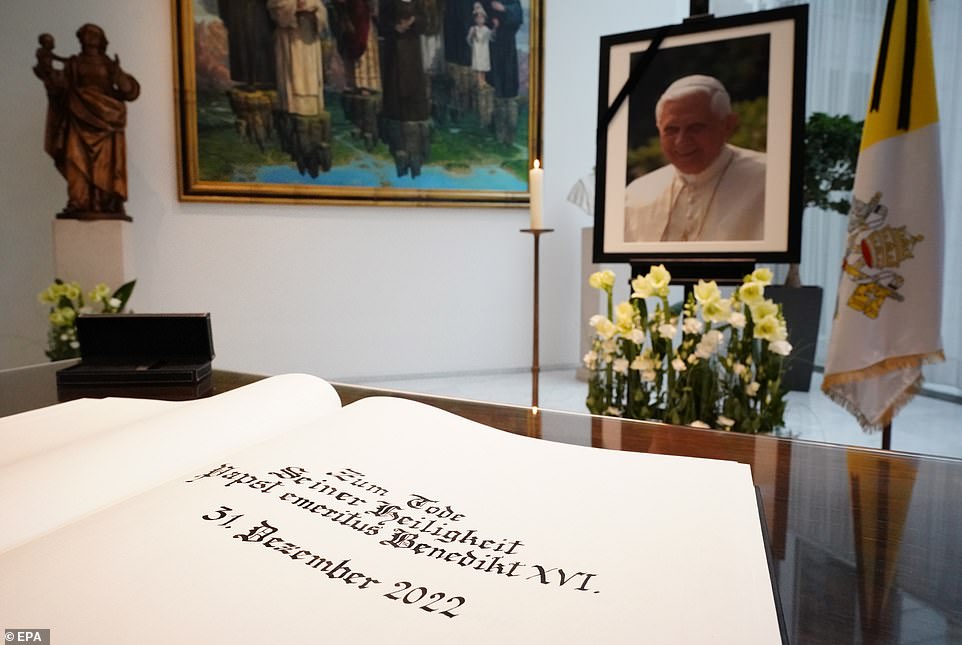 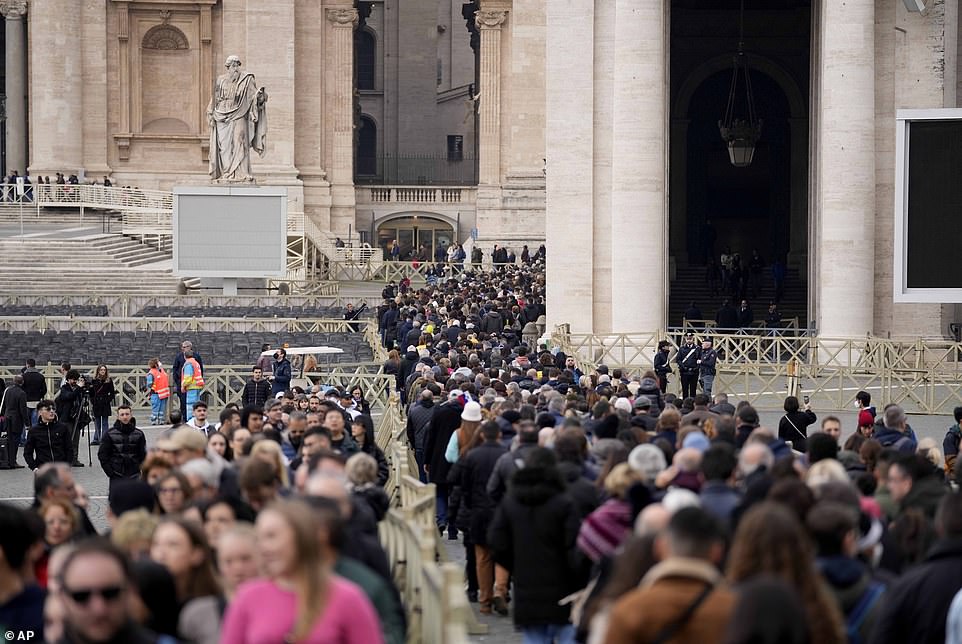 ‘I wanted to pay homage to Benedict because he had a key role in my life and my education. I arrived here at around 7.30am, after leaving Venice last night,’ he said.

Mr Tuccio added that he had studied theology and ‘his pontificate accompanied me during my university years’.

‘He was very important for me, for what I am, my way of thinking, my values. This is why I wanted to say goodbye today.’

Benedict, born Joseph Ratzinger in Marktl, Germany, will lie in state until Wednesday and his funeral will be held on Thursday in St Peter’s Square, presided over by Pope Francis.

The Vatican has said it will be a simple, solemn and sober ceremony in keeping with his wishes.

The ‘simple’ funeral is in keeping with the wishes of the former pope, who for decades as a German cardinal had served as the Church’s guardian of doctrinal orthodoxy before he was elected pope in 2005.

Papal funerals typically draw heads of state from around the world, but the Vatican has said that only official delegations from Italy and from Benedict’s native Germany were formally invited to attend the ceremony.

Representatives from other countries or organisations can attend in a private capacity, diplomats were told.

A few VIPs had a moment at the basilica before the general public to pay their respects, including Italian prime minister Giorgia Meloni, the far-Right leader who in the past has professed admiration for the conservative leanings of Benedict.

Italian president Sergio Mattarella and his daughter Laura Mattarella also paid their respects to the former pope and theologian.

Security officials expected at least 25,000 people to pass by the body on the first day of viewing.

Marina Ferrante, 62, was among them and arrived an hour before the doors were opened.

‘I think his main legacy was teaching us how to be free,’ she said. 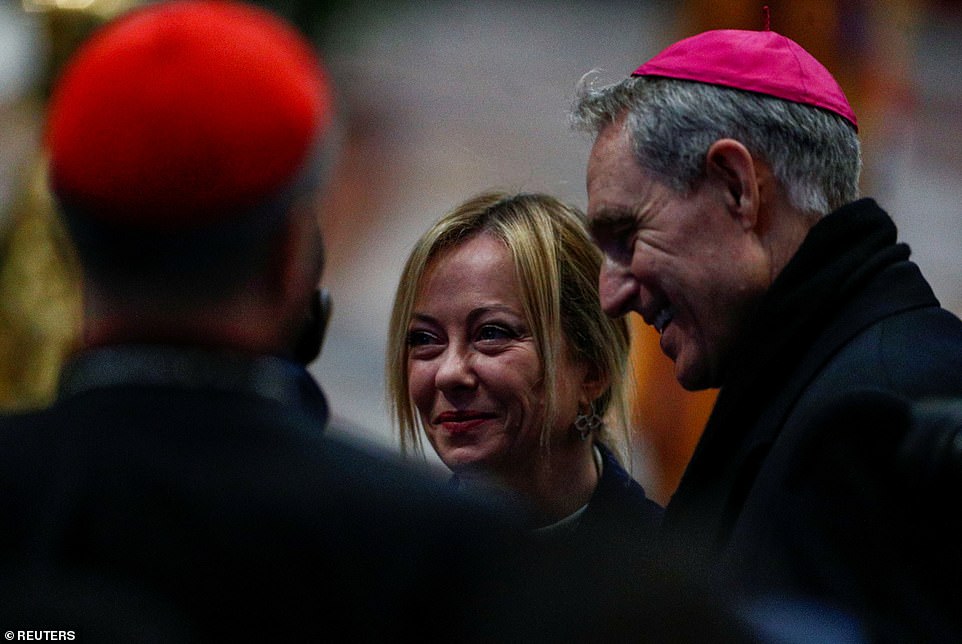 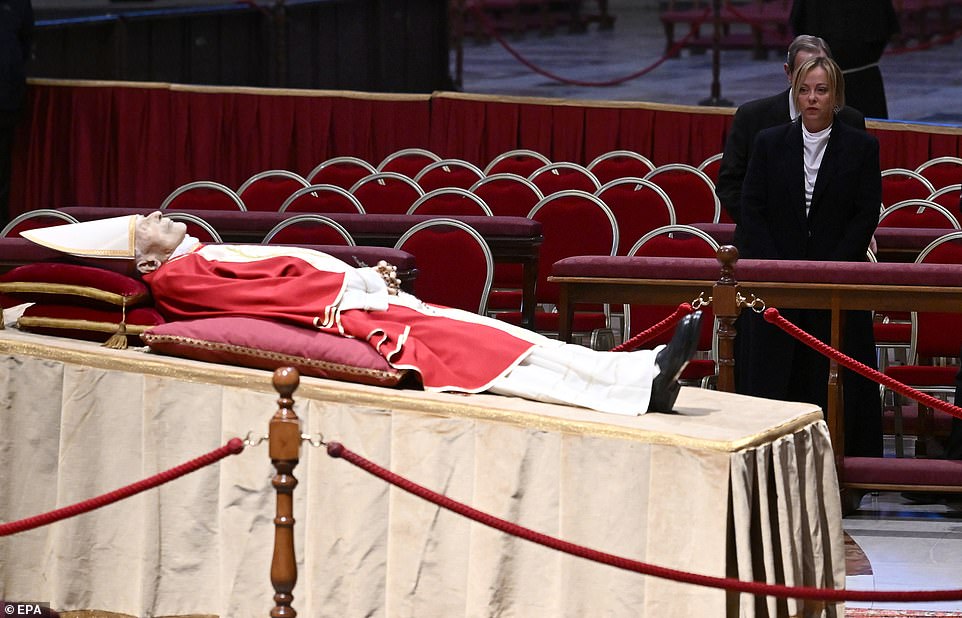 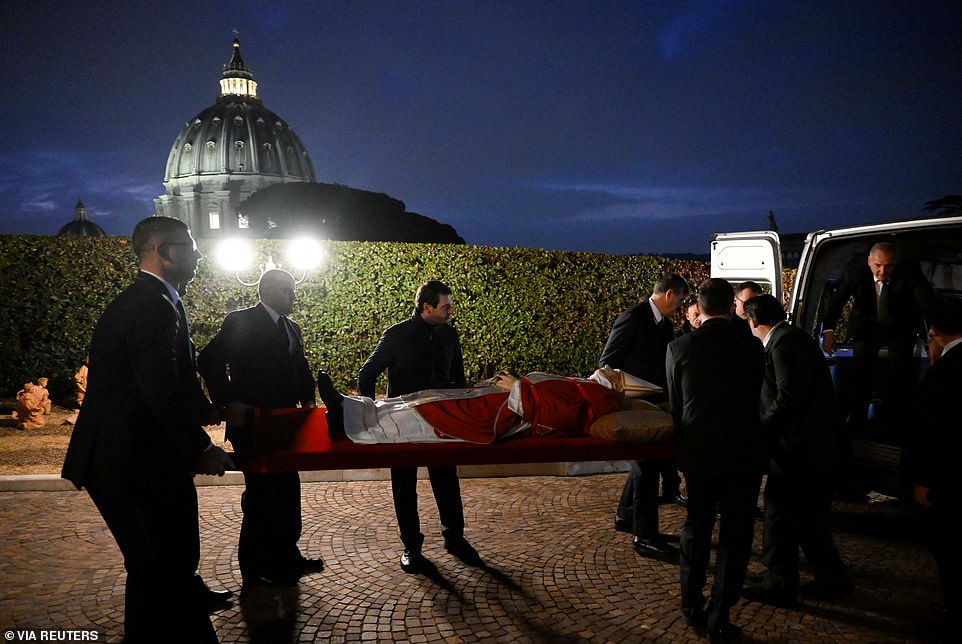 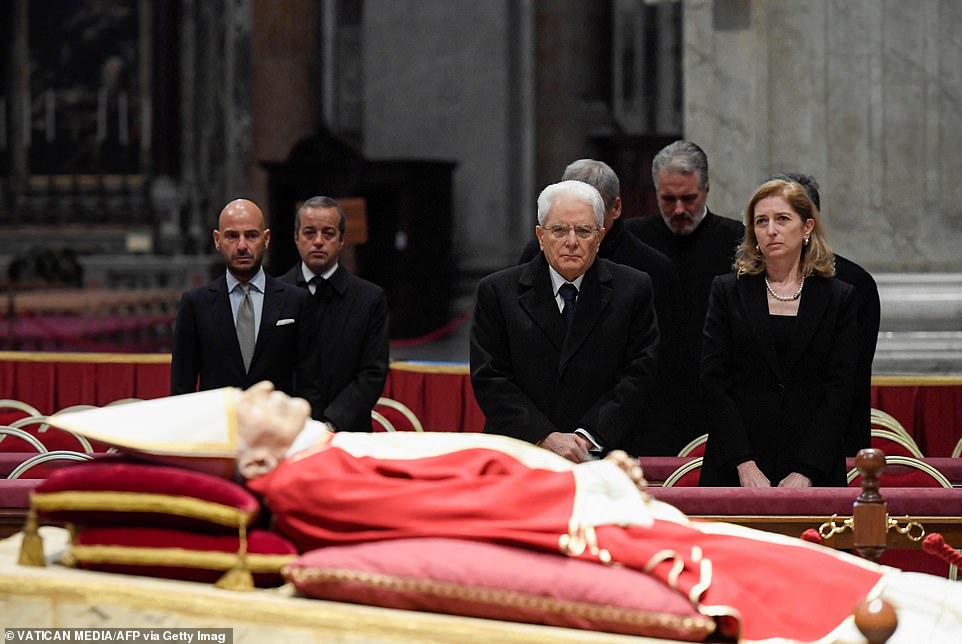 ‘He had a special intelligence in saying what was essential in his faith and that was contagious for other faithful.

‘The thing I thought when he died was that I would like to be as free as he was.’

Mountain Butorac, 47, who is from Atlanta but lives in Rome, called viewing the body ‘an amazing experience.’

Mr Butorac said he arrived 90 minutes before the doors opened to the public.

‘I loved Benedict, I loved him as a cardinal, when he was elected pope and also after he retired,’ Butorac said.

‘I think he was a sort of people’s grandfather living in the Vatican.’

He came to the Vatican to pray for Benedict when he was ill, ‘so I wanted to be here today to say goodbye.’

Referring to Benedict’s relationship with the current pope, Mr Butorac added: ‘I think he and Francis were close, they cared for each other.’

Veronica Siegal, 16, a US high school student studying in Rome, said: ‘I feel like he was a grandfather to us.’

She said she had read one of Benedict’s books on Jesus for one of her courses.

Her classmate Molly Foley, also 16, said: ‘I know that he is in a better place because he was a holy man and he led so well.’

A third girl in the group wore an American flag on her back. 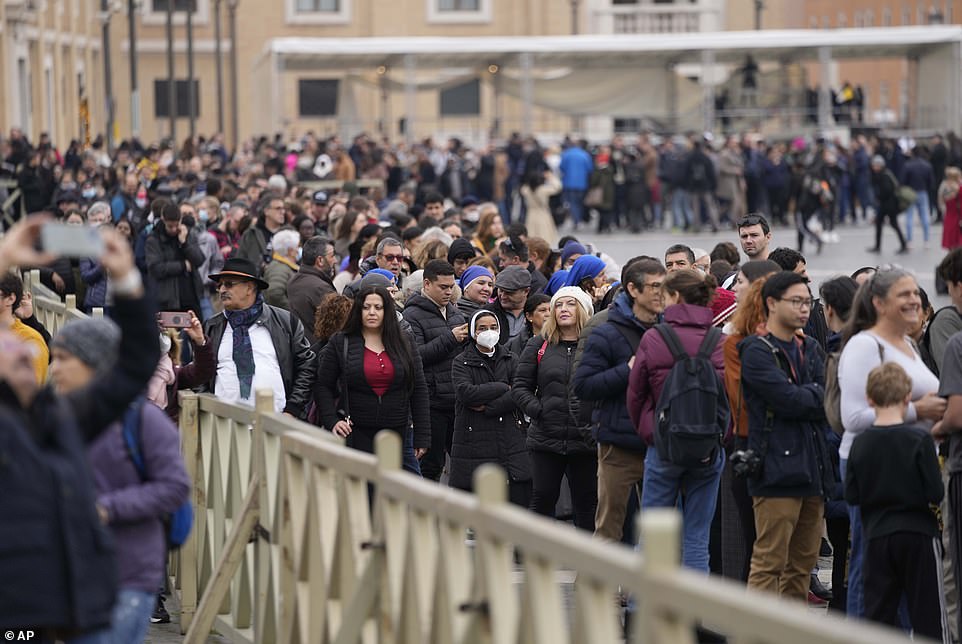 Security officials expect at least 25,000 people to pass by the body on the first day of viewing 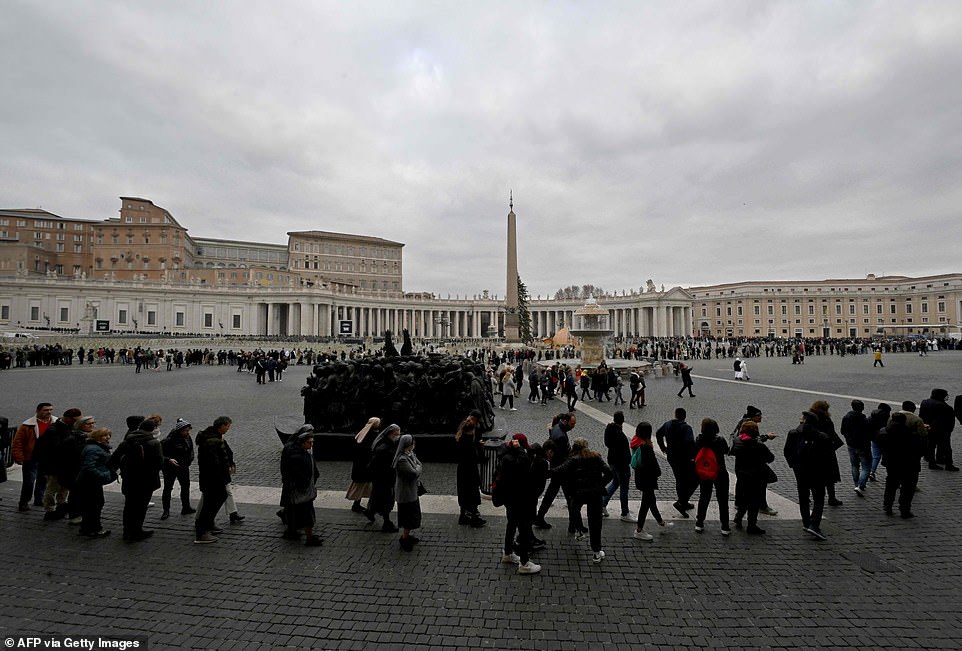 Benedict will lie in state until Wednesday and his funeral will be held on Thursday in St Peter’s Square, presided over by Pope Francis 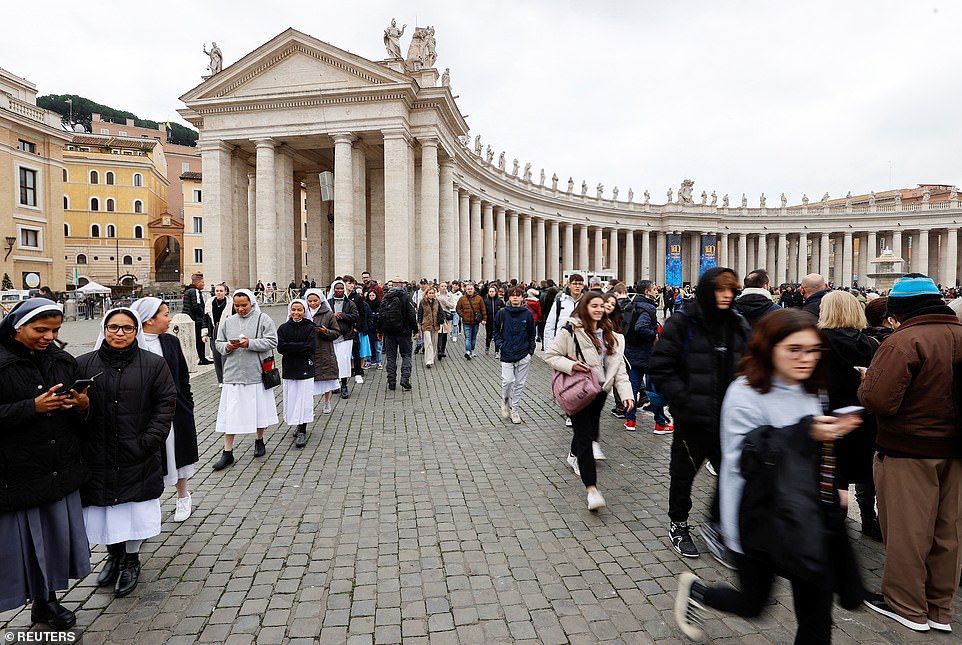 The Vatican has said it will be a simple, solemn and sober ceremony in keeping with Benedict’s wishes

Benedict’s body, dressed in red and gold liturgical vestments and placed on a simple dais, was moved in a procession just before dawn through the Vatican Gardens from the monastery to a spot in front of the main altar of Christendom’s largest Church.

Twelve hours of viewing are scheduled for Tuesday and Wednesday before Thursday morning’s funeral.

Pope Francis prayed for his predecessor’s passage to heaven as he presided over a special New Year’s Day Mass in St Peter’s Basilica on Sunday.

He spent eight years leading the world’s 1.3 billion Catholics before stepping down from the papacy in 2013, citing his old age and declining health.

The first pope to retire in 600 years: What will be different about Benedict’s funeral?

This is said to be at the request of Benedict. However, there has also been consideration over how the funeral for a sitting pope could vary from that of a retired one.

The Vatican has elaborate rituals for what happens after a reigning pope dies but none for a former pope, so what happens in the next few days could become the template for future ex-popes. 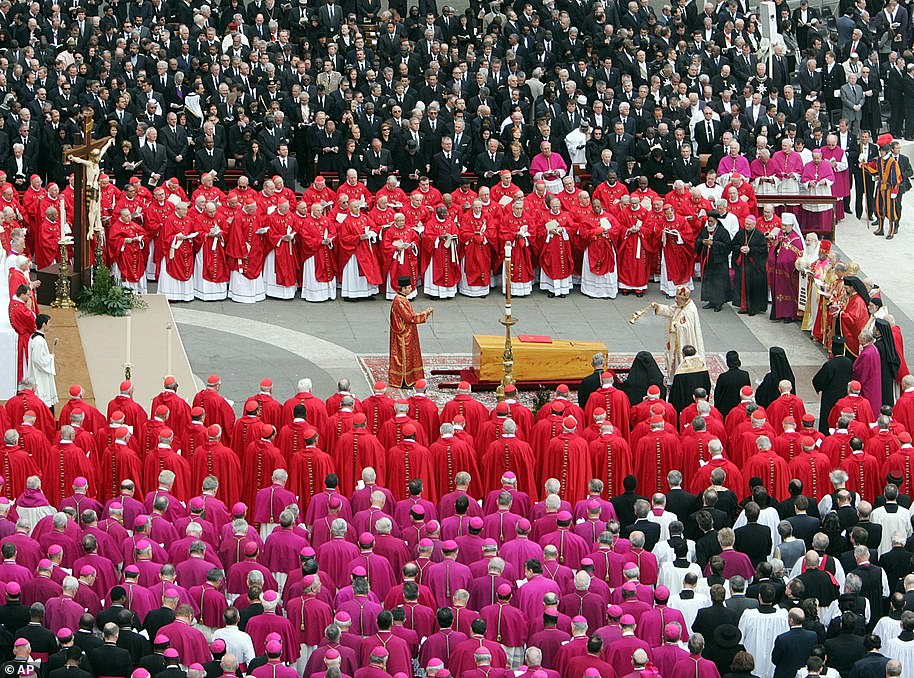 The Vatican has painstakingly elaborate rituals for what happens after a reigning pope dies but none for a former pope (Pictured: John Paul II’ s funeral in 2005)

Simple is a far cry from the Mass for John Paul II, which lasted three hours and was at the time the largest attended funeral in history.

Sitting Pope Francis will preside at Benedict’s funeral, a role that traditionally falls to the dean of the College of Cardinals.

The bells at St Peter’s Basilica did not toll on announcement of Benedict’s death, as this is said to be the case only for sitting popes.

In 2020, Benedict’s authorised biographer, Peter Seewald, was quoted as telling Bavarian newspaper Passauer Neue Presse that the emeritus pope had prepared a spiritual testament stating that he wanted to be buried in the same crypt where John Paul II was originally laid to rest.

It has not yet been confirmed whether there will be the nine-day mourning period, called the novemdiales, following Benedict’s funeral – as is tradition.

Benedict’s body is lying in state at St Peter’s Basilica before the funeral takes place on Thursday.

Two Swiss guards stood on either side of the body, which bore no papal insignia or regalia, such as a crosier –  the silver staff with a crucifix – or a pallium – a band of cloth worn around the neck.

Both were on Pope John Paul’s body when it lay in state in 2005.